UPDATE: SPD has now posted photos of the bikes. 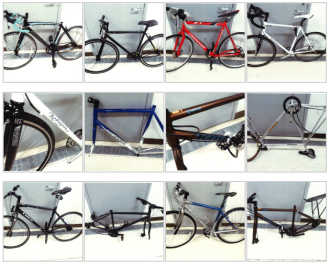 This is great. I sure hope you reported your stolen bike, because the police may have just recovered it.

More efforts like this could make stealing bikes to make quick cash via Craigslist a little less appealing. Kudos to whoever sent the tip to police, and big kudos to SPD for taking it seriously and following through.

A tip on Twitter led Seattle police to uncover a surreptitious showroom of stolen bicycles Tuesday evening in downtown Seattle.

Major Crimes Taskforce detectives began investigating a suspicious Craigslst seller earlier this week after receiving a lead through the department’s Twitter account, @SeattlePD, that a man was selling high-end bikes at deep discounts.

After detectives found the seller had at least 10 bikes posted online, an undercover detective, posing as an interested buyer, set up a meeting with the suspect.

The detective met the man around 6 PM Tuesday at 3rd Avenue and Stewart St, where the suspect showed off one of his bikes. The detective told the man the bike wasn’t quite what he was looking for and asked if he had anything else. It just so happened the suspect had a  partner-in-crime waiting right across the street with a second bike.

After showing off the second bicycle, the suspects brought the detective down to a nearby storage facility, where they were storing dozens of suspected stolen bikes.

The detective picked one out, paid $200 for it and went to check the bike’s serial number, which quickly showed it had been reported stolen. Police arrested the two suspects and got permission to search the storage unit, where they recovered a total of 27 bikes—many of them high-end—as well as 30 or so expensive bike rims.

Police are now working with prosecutors on the case and are still sorting through all the recovered bicycles to attempt to locate their rightful owners.

As a reminder, you can list your stolen bike on BikeIndex via the Seattle Bike Blog Bike Submission page. People can then find your bike listing when they search the serial number or bike description.

You should also report all bike thefts to the police. In Seattle, call the SPD non-emergency number and file a report with an officer: (206) 625-5011 (if the thief is still in the area, call 911). If your bike has a monetary value less than $500, you can file an SPD report online.

Founder and Editor of Seattle Bike Blog.
View all posts by Tom Fucoloro →
This entry was posted in news and tagged bike thefts, crime, spd. Bookmark the permalink.