Dexter will be closed overnight this week, will reopen with better bike lanes 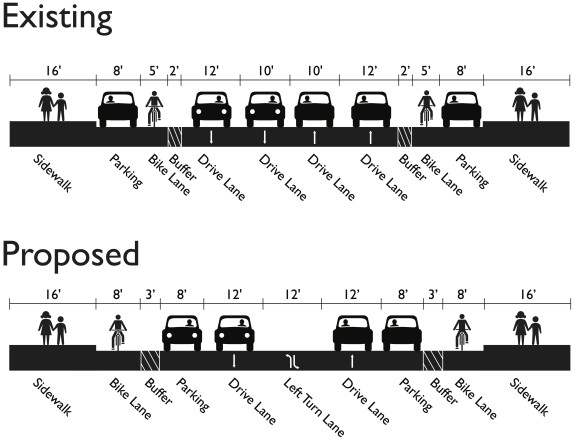 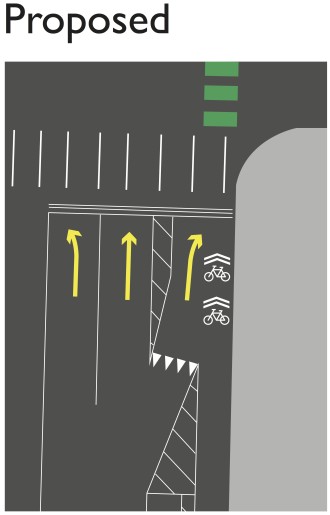 How shared turn lanes will work. Image from SDOT

Dexter Ave will be closed overnight Monday and Tuesday between Denny and Mercer so crews can repaint the street with a new complete streets design that includes wide parking-protected bike lanes and a center turn lane.

Construction work is not totally finished on the street, though. While work is wrapping up near Harrison, it is ongoing near Republican. And, of course, Mercer construction changes are still in place.

The new street design, which was designed by SDOT but paid for by WSDOT as part of the deep bore tunnel project, will also be the city’s first experiment in using a NACTO-approved low-budget protected bike lane design that involves shared bus stops and right turn lanes. Buses will also still pull to the curb instead of bus islands like were installed on the north section of Dexter.

The big question will be whether shared bus stops and turn lanes meet the “all ages and abilities” standard pushed by safe streets groups. And, of course, we will be watching closely to see if the left turn conflicts are solved by addition of the wider bike lanes and the new center turn lane. People making quick left turns were how Mike Wang was killed and how Brandon Blake was seriously injured on Dexter in recent years.

More details on the overnight closures, from WSDOT:

To make room for SR 99 tunnel construction, crews are currently relocating utilities along Dexter Avenue North, and Harrison and Republican streets.  Crews will close Dexter Avenue North between Denny Way and Mercer Street overnight Monday, Dec. 15 and Tuesday, Dec. 16 in order to restripe the roadway. Bicyclists and drivers will be detoured to Ninth Avenue North. This work is weather-dependent and may be rescheduled.

Look for changes beginning Dec. 17
·        Dexter Avenue North: New striping on Dexter between Denny Way and Harrison Street will include one travel lane in each direction, a center turn lane and a bicycle lane between the curb and the parking lane. For more information, please visit SDOT’s Dexter Ave N Safety Improvements Project page.
·        Harrison Street will be open between Aurora and Eighth.
·        Republican Street will be closed between Aurora and Eighth.

Founder and Editor of Seattle Bike Blog.
View all posts by Tom Fucoloro →
This entry was posted in news and tagged dexter, sdot, wsdot. Bookmark the permalink.

49 Responses to Dexter will be closed overnight this week, will reopen with better bike lanes