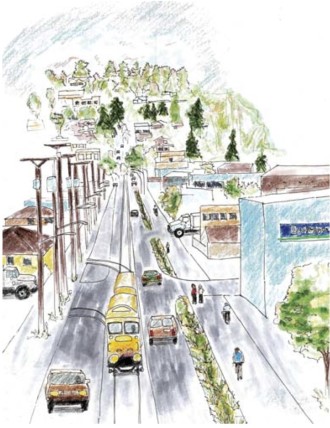 What NW 45th Street could look like with a complete Burke-Gilman Trail. That train almost never runs, but it is technically an active rail line. 2008 image from SDOT

After well more than a decade and dumping cement trucks full of private and public money into design and legal battles over the Ballard Missing Link of the Burke-Gilman Trail, I can understand why people’s ears might perk up when they hear that there could be a Plan B. The idea certainly captured the imagination of Jonathan Martin, a member of the Seattle Times Editorial Board and a consistent supporter of bold bicycle projects in Seattle. It also caught Councilmember Sally Bagshaw’s attention.

But the group’s “plan” for protected bike lanes on Leary and Market is really just a smokescreen that will not address current safety concerns or complete the trail. It will do nothing for safety of people walking (or jogging or in wheelchairs or pushing strollers) and cannot be considered a reasonable alternative to actually completing the trail.

First, some background for those not familiar with the issue. Back in 2003 around the time the Bush administration was presenting their “evidence” of WMDs in Iraq to justify a war there, the Seattle City Council voted to complete the extraordinarily popular Burke-Gilman Trail by linking the dead end at Fred Meyer to the dead end at the Ballard Locks, thus providing a comfortable biking and walking link from Golden Gardens all the way to the Sammamish River Trail in Bothell (with trail links to Redmond and beyond).

Ever crash on the Missing Link? There’s a sticker for you.

The unfriendly industrial and commercial streets connecting these two endpoints have been the scene of untold numbers of bike crashes and injuries. It’s safe to say that, when you include unreported crashes, they easily number in the thousands. It’s so common to crash on the Missing Link that there’s even a sticker for people who have done it.

But a crew of Ballard businesses calling themselves the Ballard Appellants lawyered up and have used every possible legal hold to delay the trail’s completion. As a result, people continue to crash and get hurt on the Missing Link. And since the city has still not begun work on a pricey and time-consuming Environmental Impact Statement (“An EIS for a biking and walking trail?” you ask incredulously. Yes, and EIS for a trail.), we aren’t gonna see the final document until 2016. The Ballard Appellants have threatened to sue again if they can find a chance and will do whatever they can to push it back even further.

If there was a time when the Appellants were open to actual and real talks about trail design, it ended sometime during the Bush Administration (and before this blog even existed). In recent memory, it’s been all about delaying the project at any cost and for whatever reason finds traction (in 2012 they threw 19 reasons to delay the project at the judge, who tossed out 18 of them).

Completing the trail is a popular idea and has been politically decided and funded for so long, it’s hard for me to even get up the will to write yet another post explaining why we should complete the Missing Link (this is post number 28, for those keeping track at home).

Need more evidence that the Appellants’ reasons for wanting these bike lanes are not so altruistic? Check out this shameless fear-mongering slide from their Plan B slideshow: 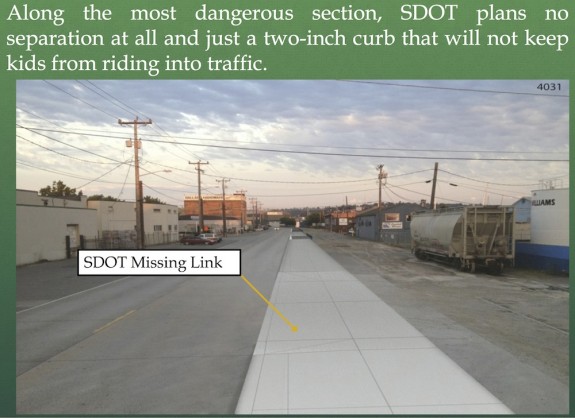 Yep, completing the trail is essentially the same as sending children to their deaths, says the Ballard Appellants. Good grief.

But like any good hostage takers, they have offered a deal that is not really a deal at all. It’s really just their original demand (“don’t build it here!”) obscured by a smokescreen (“look over there!”). The Ballard Appellants, lead on the legal front by Josh Brower, have been pushing this so-called “Plan B” that would install protected bike lanes on Leary Way and Market Street instead of completing the trail along the rail corridor like the rest of the route. They even have a website now to promote the idea.

While we here at Seattle Bike Blog certainly agree that those bike lanes are a good idea on their own merit (especially on Market Street), they would not complete the Burke-Gilman Trail.

Trails are not just for biking 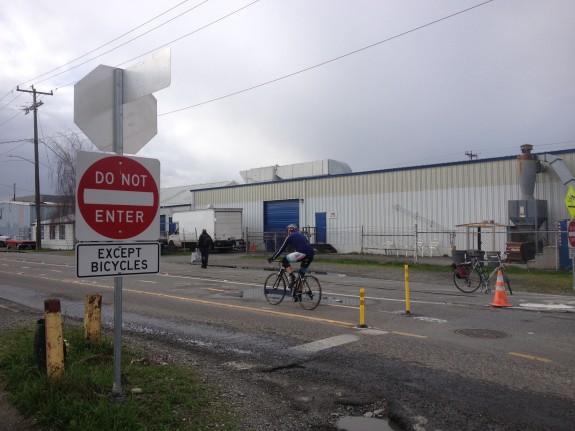 The Missing Link is not just about bikes. People walking are left without a safe and comfortable connection, too.

The biggest reason “Plan B” is not a full solution is because it does absolutely nothing for all the people using the trail in ways other than biking. It’s very popular for people out for a stroll, walking to work, jogging for exercise or visiting attractions like parks, the Locks or the Ballard business district. Or at least it would be popular if it were complete. There are many sections of the trail where people walking outnumber people biking, so any “alternative” would need to provide a quality, direct and comfortable connection for people on foot.

It’s not rare to see someone rolling down NW 45th Street in a wheelchair or pushing a stroller along the train tracks. Protected bike lanes two blocks away won’t do much of anything to help people on foot or in wheelchairs complete the 1.5 miles of missing trail. This alone is reason enough to dismiss “Plan B.”

The rail corridor is a gem of Seattle

The Burke-Gilman Trail is one of the most successful Rails-to-Trails projects in the nation, and that’s because it takes advantage of a rail corridor that creates a unique trail experience unlike what you’ll find on a commercial street. It is closer to the water, it has few street crossings, and it has few hills.

From a transportation point of view the Burke-Gilman isn’t even a very direct connection between many high-demand places. It’s roundabout and usually skirts neighborhoods rather than going through the middle of them (Fremont and UW are exceptions). But people go out their way to walk and bike on it, and it can get quite packed. It has few stoplights, so users can get on and cruise or stroll without interruption. Plus, you get a great tour the city’s working inner waterfront, which is a cool part of Seattle that many people rarely see.

Simply put, it’s a gem of the city.

Protected bike lanes on Leary and Market are something entirely different. They are smart neighborhood bike transportation and street safety investments. Protected bike lanes would transform Market Street and could come with a whole lot of crosswalk improvements to make that street the people-focused center of Ballard it should be. Plus it could be a workable bike route detour until the trail is finally completed.

But “Plan B” bike lanes would not be the Burke-Gilman Trail, and the Missing Link would remain missing.