Some updates on the Westlake bikeway design

The city revealed a few more details about the developing plans for the Westlake bikeway. In documents presented to the Design Advisory Committee in August, planners appear to be primarily focused on the so-called “sidewalk concept,” which would route a two-way bikeway on the east side of the giant parking lot.

As we reported previously, the city was looking at two concepts, one that would travel in the middle of the parking area and one that would stick closer to Lake Union. The “center concept” was interesting, but it presented more comfort challenges and parking removal than the more obvious “sidewalk concept.”

The committee and project designers are working to figure out how best to handle a couple tricky spots toward the north end of the endless parking lot. 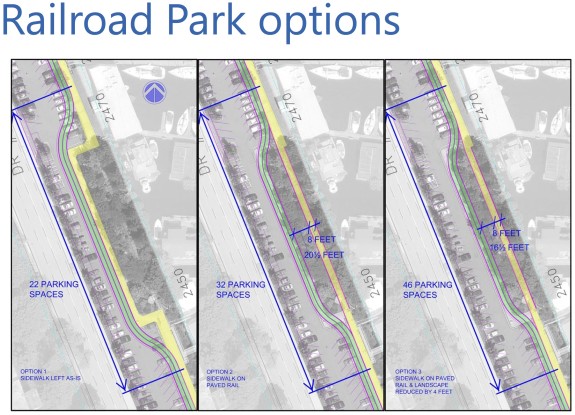 For example, what should happen near that awesome little railroad park? Today, if you continue straight on the sidewalk, you enter a wooded area with the old railroad tracks still in place (so it’s not ADA accessible, but it is kind of cool). There is access to some floating homes and a truly wonderful little bench where you can sit and feel like you’re a million miles away from the city.

The easiest option would be to route the bikeway in the parking lot area around the park and existing sidewalk (left option). This would eat into the number of parking spaces a little, but it would preserve the tracks in the park.

Another option would be to remove the tracks and pave a sidewalk through the park. Then the bikeway could use the space currently occupied by the sidewalk (plus a little more, since the sidewalk is not wide enough). A third option would be essentially like the second one, but would actually cut into the green space in order to squeeze a few more parking spaces into the area. 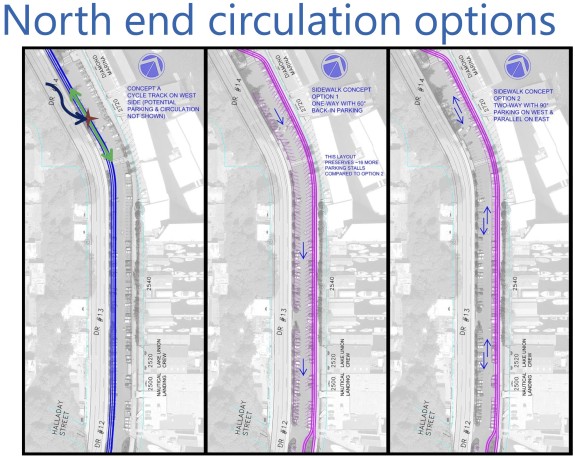 Another question is to figure out the best way for the project to connect to the shared-use path leading to the Fremont Bridge. Routing the bikeway on the west side of the parking lot would create a conflict point with anyone turning into the parking lot, designers determined, so that is probably not a good option.

But they do have two options for the parking layout: Keep the parking lot drive lane two-way and use parallel parking on one side or turn the parking drive into a one-way and have back-in angled parking. From a bikeway perspective, both options would work, so this is really an area where neighbors should have the majority of the say.

It is important to remember that while the Fremont connection is definitely going to be more heavily-used, there is also an awesome connection to the Ship Canal Trail if users continue north under the bridges. I don’t think many people know about this connection today, and it essentially involves biking on an access road.

The Bike Master Plan shows a continuous trail connection from the Ship Canal Trail to the new Westlake bikeway. Obviously, that would be a great solution. Another option might be to give the area the neighborhood greenway treatment with clear signage and traffic calming. What do you think? Let us know in the comments. 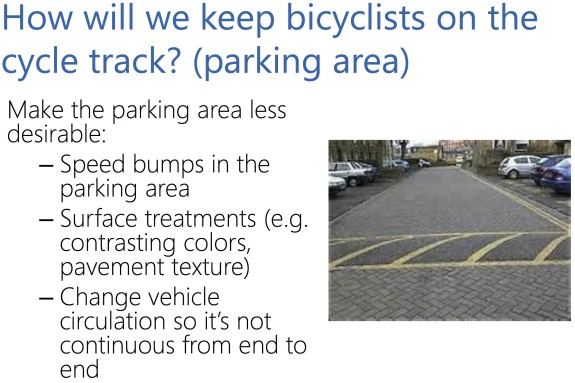 One of the more interesting notes in the August presentation was a prompt to discuss ideas for how to discourage people from continuing to bike through the parking lot once the bikeway is open. One interesting idea was to use speed bumps in the parking area. Not only would this slow down cars — making the parking area safer for everyone — but it would also be one extra reason for someone on a bike to use the bikeway or the street instead. That seems like a pretty smart idea that addresses a lot of different concerns all at once.

Below is the full presentation. You can learn more about the Design Advisory Committee and how to attend their meetings via the city’s website.

22 Responses to Some updates on the Westlake bikeway design