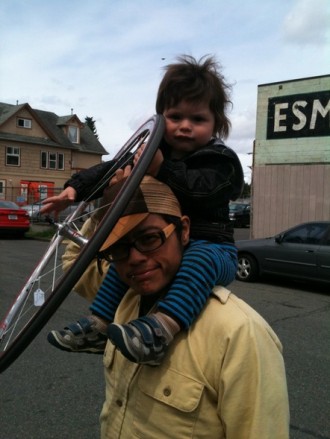 Donald Villarreal made his first appearance on Seattle Bike Blog in one of our first ever stories, which was about Bike Works’ volunteer repair parties. Also featured in that story: Davey Oil, who would later leave Bike Works to start G&O Family Cyclery in Greenwood.

Donald ran Bike Works’ efforts to fix up donated bikes to create high quality, affordable bikes for sale to the community. But beyond that, it’s hard to imagine Bike Works without Donald around.

The good news is that Donald is joining the staff at G&O (a Seattle Bike Blog sponsor), so he’ll still be in town working on cool bikes. Here’s the announcement from Bike Works:

Donald Villarreal had decided to step down from his position as Recycle and Reuse Manager at Bike Works after seven years of awesome service to our organization. Donald will be joining G&O Family Cyclery, a great, growing bike shop in Greenwood, as their lead mechanic.

All of us at Bike Works want to thank Donald for his immeasurable contribution to Bike Works and its community of youth, volunteers, class participants, and supporters.

Donald’s legacy of work at Bike Works has made the organization better and made bikes and the bike community more accessible. Donald will work at Bike Works through the end of July to help ensure smooth transition and hiring process.

But Donald leaving means Bike Works is now hiring for one of the coolest bike mechanic jobs in town. For more information and how to apply, see the Bike Works website.