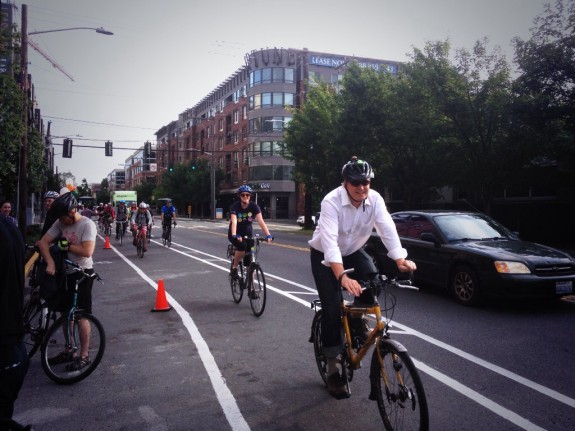 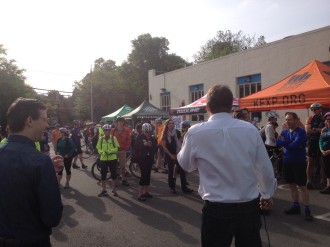 You gotta love Bike to Work Day. It’s like a look into the near future when the everyday bike commute rate grows a bit higher. Plus there are people all over the region waiting at tables to wave at you and give you coffee, cookies and swag just because you’re on a bike. How cool is that?

Seattle City Councilmembers Tom Rasmussen and Mike O’Brien were among the throngs of people biking on Dexter to the KEXP commute station for a short rally. Once at the KEXP studio, they told the people gathered that “it’s on us” to fund the bike plan and make the city’s streets safer and more comfortable for biking.

“Keep whispering $20 million to us,” said O’Brien, echoing a number Rasmussen said the city would need to spend annually, on average, to complete the bike plan within 20 years. That’s the magic number to hit (or exceed) in the city’s budget, and would represent an 80 – 100 percent increase in current levels.

If Bike to Work Day 2011 was about “peace on wheels,” as Sally Bagshaw put it, and 2012 was the year that Seattle Public Schools jumped with both feet into the Bike to School movement, the biggest message from 2014 is that the bike plan gives us the blueprint to make both busy and residential streets safer and more comfortable.

We have had the debate about “bikes vs cars” and determined that it is nonsense. We are all just people trying to get where we’re going, and we should be able to do so safely and comfortably. We have done the hard work of figuring out where and how to make improvements.

Now, we just need to fund it and make it happen.

How was your Bike to Work Day? Let us know in the comments! 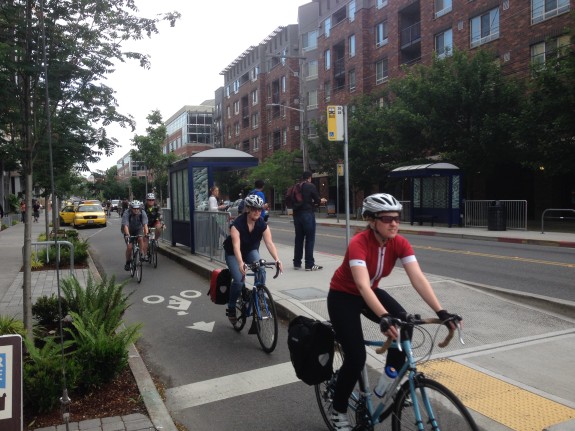 Dexter shows what a truly complete street can look like.