Friday is Bike to Work Day: Ride with Councilmembers + Map of commute stations 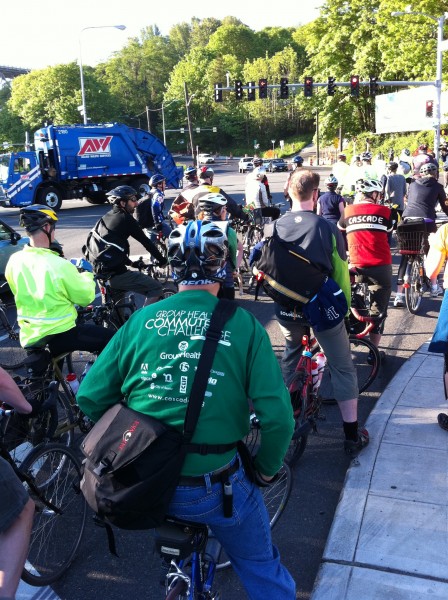 Bike to Work Day is Friday! It’s the perfect day for interested people to make the leap and give biking to their jobs a try. The number of people biking downtown surge, giving a little look into the near future when bike rates are just a bit higher.

The best part of the day, in my opinion, is the annual ride with elected officials. This year’s ride starts just south of the Fremont Bridge, heading toward downtown at 7:30 a.m. The group usually gets pretty big, like a giant bike train of people cruising at a comfortable speed toward downtown.

Instead of riding all the way to City Hall, as in previous years, this year’s ride will stop at the KEXP studio on Dexter just north of Denny. Councilmembers Mike O’Brien and Tom Rasmussen will speak at a rally there before folks head off to work.

If the official ride doesn’t work for you, no worries. You are not left out. See the map below to find some fun commute stations along your route to work. Most stations are independently organized and have different themes. Some will serve coffee and light snacks, others will give encouragement or swag. Either way, give yourself some extra time so you can stop and chat on your way to work. It’s a blast.

This year, White Center’s 16th and Roxbury commute station sounds like it might be the best station in King County: “Coffee from Caffe Delia, Breakfast Pizza from Proleariat Pizza, Breakfast Ice Cream from Full Tilt, Breakfast Sandwiches from Zippy’s, Mechanic from Aaron’s Bike Shop.” Breakfast Ice Cream? I didn’t know that was a thing until this moment. My life has changed.

On Friday morning, thousands of people across the city, region and state will leave their cars at home and pedal to work. Dozens of Commuter Stations along the way will provide them with encouragement, snacks and swag. And with the weather we’ve been having, we are expecting the biggest Bike to Work Day numbers yet!

Bike to Work Day presented by F5 shows what our streets could look like every day if we continue encouraging and investing in bicycling as transportation.

The ride leaves from the Fremont Bridge at 7:30 a.m. and ends at KEXP where the rally starts at 8. Mike O’Brien and Tom Rasmussen will do a short on-air interview and speak at the rally.

Roll over for bites and beverages from Tom Douglas Restaurants, tunes from KEXP DJ Greg Vandy and tours of ViaBike and Via6 apartments. Bring your friends and colleagues to celebrate a day of two-wheeled happiness!

Departs from Wall and Oakes Ave for a fun-filled ride to Everett Station. All participants receive a special gift and are eligible to win prizes.

Map of Commute Stations, from Cascade:

6 Responses to Friday is Bike to Work Day: Ride with Councilmembers + Map of commute stations