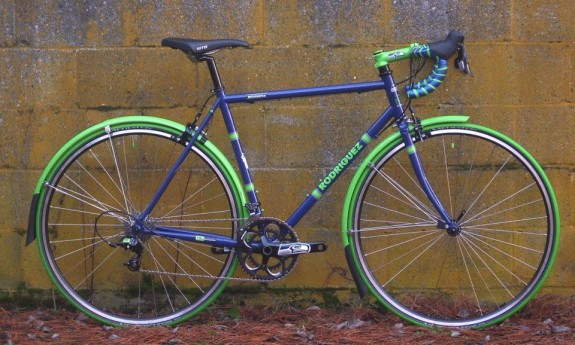 Remember that amazing Seattle-made, Seahawks-themed Rodriguez bike that Mayor Ed Murray put on the line in his Super Bowl bet with Denver Mayor Michael Hancock? Well, (spoiler alert) the Seahawks won and the bike stayed here. And there’s really only one obvious choice about what to do with it: Donate it to the Bike Works auction.

The organization’s annual auction is March 23, and today (Tuesday) is the last day to score early bird tickets ($90). So if you’ve been waiting for whatever reason, go buy ’em online now.

As with the past several years, yours truly will be a volunteer at the auction. Seattle Bike Blog has also donated an item to the silent auction (you’ll have to go to find out what it is). Bike Works is an amazing organization empowering youth and adults through bicycles, whether its riding or fixing them. It’s always great to hear from people whose lives have been impacted by the Columbia City-based organization.

If you have the cash, you can bid on some fantastic and often clever stuff. If not, well, it’s still a good time and a chance to give what you can. The auction has expanded this year, so there is a seat for you if you’ve never been before.

The Seahawks bike will likely be one of the top items, and proceeds for that auction will be shared between Bike Works and Food Lifeline. R+E Cycles posted the story behind how the bike came to be on their blog.

“This is a very special bike. It brought us luck in the Super Bowl and it will be auctioned to help two great charitable organizations,” said Mayor Murray in a press release. Here’s the full text of the release:

With the recent win of the Seattle Seahawks at NFL Super Bowl XLVIII, Seattle Mayor Ed Murray has won his bet against Mayor Michael Hancock of Denver. Preceding the Super Bowl, the mayors bet some high-ticket items on the game. One of the items was a custom Seahawks Rodriguez road bike, made by local bike builders, R+E Cycles.

Through the generosity of R+E Cycles and Mayor Murray, this one-of-a-kind piece of Super Bowl history will be auctioned off at Bike Works’ 12th Annual Benefit Auction on March 23rd. To purchase tickets, or find out more information about the event, visit bikeworks.org/events/auction.

“This is a very special bike. It brought us luck in the Super Bowl and it will be auctioned to help two great charitable organizations,” said Murray. “My thanks to the Rodriguez team for providing this source that will continue to give back in the future.”

Located in Southeast Seattle’s Columbia City neighborhood, Bike Works was founded in 1996, and since then, has grown from a small start-up into a thriving community organization. They offer innovative and engaging bicycling programs to the diverse neighborhoods of Southeast Seattle and beyond. Their programs for youth and adults encourage physical activity and mechanical skill development, support healthy habits, community engagement, and environmental stewardship. Find out more about Bike Works by visiting www.bikeworks.org.

R+E Cycles is also a strong supporter of Seattle’s Food Lifeline. Food Lifeline approaches hunger as a logistical problem that can be solved, and working with the food industry and its surpluses, comes up with creative solutions to stopping hunger, including redirecting good food from manufacturers, farmers, grocery stores and restaurants that might otherwise go to waste. Find out more about Food Lifeline by visiting www.foodlifeline.org.

Proceeds from the Seahawks Rodriguez bike will be split between Bike Works and Food Lifeline.

“We are so thankful for R+E Cycles and Mayor Murray’s support,” said Deb Salls, Bike Works’ Executive Director. “Not only will one of our supporters take home a beautiful piece of Seahawks history, but the proceeds will benefit so many individuals at Bike Works and Food Lifeline. I can’t wait to see what excitement it brings at the auction!”