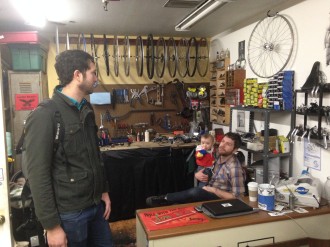 When Velo Bike Shop left it’s longtime home at 11th and Pine nearly one year ago, the shop was hoping to fill a need for a big bike shop in the rapidly-growing Denny Triangle area. But they left a void on Capitol Hill, one of the city’s bikiest neighborhoods.

Amazingly, that void largely remained until December, when Seattle Bicycle Collective quietly opened its doors at 12th and Pine. While not equipped to do the volume and have the stock that Velo did, Capitol Hill Seattle reports that SBC is taking a community-focused, hands-on direction.

It’s hard to believe, we’re not sure exactly why it happened, but Capitol Hill is in need of some more working bike mechanics. The void left by Velo’s departure last year dealt a  blow to the needs of Capitol Hill’s biking masses.

To help fill that hole a new bike shop has sprung up inside a non-descript office building 12th and Pine. The Seattle Bicycle Collective quietly opened its doors in January with a small sandwich board sign and a tiny office space inside the Richmark Label building. It’s no Velo, and that was the idea.