Sounds like the Capitol Hill bike shop vacuum is finally getting filled. And in true Hill fashion, it’s coming with coffee and beer.

Our friends at Capitol Hill Seattle report that two very different bike shop cafés are opening soon on Capitol Hill and the Central District. One has bike polo champs at the helm (Dustin Riggs is a member of the Guardians, Seattle’s premiere polo team. Watch them compete in the first ever Professional Hardcourt Bike Polo Championship here). The other is all about that bike performance.

But both represent interesting new bicycle-based business models that could also help fill the bike shop vacuum left on the Hill since Velo moved to 6th and Blanchard.

Below is the report from Justin Carder at CHS, republished with permission (I’m getting married Saturday, so posts will be a bit slow for the next week): 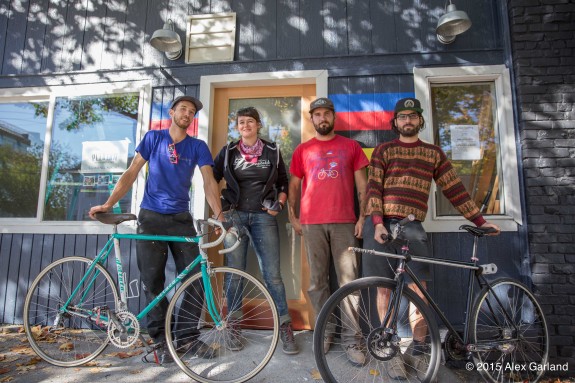 A tightly packed group of businesses combining passion for the bicycle with food, drink, and repair and maintenance services is pedaling its way around Capitol Hill. As the yellow jersey in the race of big city trends, you’re probably not going to be surprised to learn that the streets of Capitol Hill and the Central District will soon be home to not one, or two, but three bicycle cafes.

“Many cyclists kind of pick up the sport and it leads to a rabbit hole,” Dustin Riggs tells CHS. “There is a lot of culture around it.”

Riggs and his partners hope to clip into that two-wheeled enthusiasm as they prepare to open Peloton at 12th and Jefferson by early October.

“The coffee and the beer and the bikes. It’s just a lifestyle kind of thing,” he said. 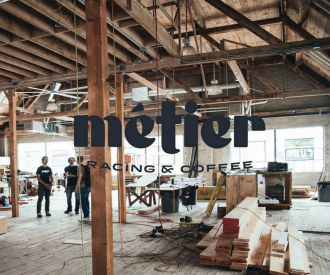 In the Great Central Seattle Bicycle Cafe Race of 2015, Peloton is the scrappy, gritty contender. Riggs and his partners came together around Seattle’s bike polo scene and named Peloton for the kind of bicycling everyman and everywoman — the peloton is the tight pack in the middle of a race where most riders group up.

Don’t look back. Métier Racing and Coffee might be gaining on you. CHS first told you early this year about the plan from longtime Seattle cycling concern Herriott Sports Performance to move to E Union and open a new headquarters that is part bike shop, part training facility, part cafe. A few months later and the project has a fancy new brand ( we’ll indulge the é for now) and a due date: a soft opening in mid October with a grand opening planned for Saturday, November 7th.

Where Peloton is jeans and Deady Baby Downhill, Todd Herriott and David Richter’s Métier is performance wear and next weekend’s crit:

The new venture –an impressive 12,500 square-foot, multi-level facility on Capitol Hill’s Union Street –will house a gym with men’s and women’s locker room facilities, a bicycle service center, retail space and café. But Métier is much more than a rebranding and expansion of HSP – it’s a whole new concept for a new, wider audience.

“We hope that people of all interests and abilities can use Metier as a place they want to hang out – train in the gym with top-notch consultants, take a yoga class, check out new bikes and equipment, have a drink or watch a game or a race on the big screen,” Herriott said.

So who is the third mystery rider in the pack? We can’t divulge everything just yet but there’s another player lining up for a ride in Pike/Pine with an intriguing project also destined to combine bikes, booze, and chain grease. Here’s a map of the race route with a few key details — for now — obscured: 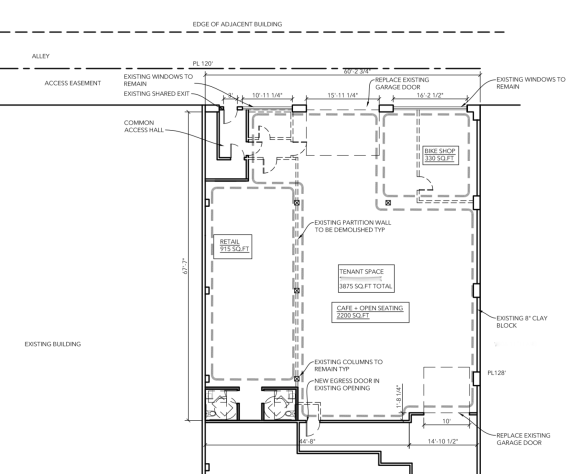 At Peloton, Riggs is too busy with the buildout to worry much about competition. He’s not predicting a rivalry but there could be a few shenanigans ahead as the businesses set out on the course.

Approaching the last miles of the project the group has been working on in some form or another for five years, Team Peloton is hoping to open as soon as possible — at least by the first weeks of October, if not sooner. They’ll start with a limited kitchen with help from First Hill’s Sugar Bakery supplying pastries to go along with the coffee. CHS hopes for at least a few surly bike messengers in line to fill in a little of our Monorail Espresso nostalgia from when we worked downtown. Beer and wine will help fuel the evenings. A full kitchen for Hart to do her thing — “wraps, healthy living, breakfast and lunch, maybe dinner once a month” — will follow.

The cafe, like Métier, will also feature a full service repair shop with new and used parts and help with bike fitting.

Riggs said he’s looking forward to seeing it fit together and creating a space for “bike nerds” and “every day” bicyclists.

“Peloton isn’t the leaders out in front, and it’s not the drop off. It’s the big group in the middle,” he said.