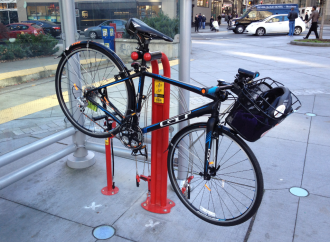 Get a flat? Brakes too loose? Need to tighten that rattling fender bolt that drove you absolutely bonkers the whole way to work?

The good folks at Commute Seattle have got you covered. In partnership with the Metropolitan Improvement District, they recently installed a public work station at the McGraw Square covered bike parking (5th and Stewart).

Similar to work stations installed on the UW campus in 2011, the Sportworks design will get a real endurance test in downtown Seattle. It includes bolted-down bike pump (way better than struggling with those mini pumps that fit in your bag), common bike tools attached by cables and a stand that can hold most bikes to make it more comfortable to make adjustments. Now, if it only included a permanent bike mechanic…

The bike stand has been installed underneath the covered bicycle parking adjacent to the South Lake Union streetcar terminus. Eight common bicycle tools such as tire levers, wrenches, and hex keys are permanently secured to the stand via aircraft-grade cables. The rugged design is built to withstand the elements, misuse, and vandalism. The design will prohibit bicycles from locking to the stand, ensuring availability for all users.

Bicycle commuting in Downtown Seattle is up 18 percent since 2010, with 6,500 Downtown commuters now choosing to bicycle each weekday. Installing this bike stand will remove the uncertainty associated with unplanned repairs or flat tires, enabling more people to feel comfortable bicycling Downtown, whether for commuting, shopping, or recreation.

“Bicycling is an efficient and healthy way to access our growing Downtown,” said Downtown Seattle Association President and CEO Kate Joncas. “Installing this stand in McGraw Square is another way we can show that Downtown strongly supports bicycling.”

“We are really excited that bicycle commuters will no longer have to endure an underinflated tire or a loose seat post,” said Commute Seattle Executive Director Jessica Szelag. “Thanks to the support of DSA, MID, and Sportworks, these minor repairs can now be made for free, 24 hours a day, 7 days per week in McGraw Square.”