A look ahead at Bike Month 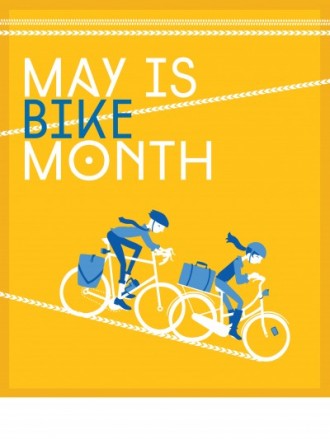 Every May, the city’s bike events kick into high gear with most efforts focused on bike commuting. The weather gets gradually warmer, and the number of people biking on major commute routes swells.

What started as Bike to Work Day has grown over the years until it is now a month of events aimed at helping people get back in the saddle, whether they fell out of the habit during the winter or haven’t been on a bike since they were young.

Bike to Work Day is May 17 this year, and is on track to be the biggest ever. You can still start or join a Commute Challenge team (or, if you are a journalist without a team, email me to join The News Cycles).

For a full list of official Bike Month events, check out Cascade’s calendar. Here’s a preview of some of those events, from Cascade:

Ride with your child to school! Encourage your school to get involved today. www.cascade.org/bike-to-school.

Commute Challenge team captains are invited (+ one guest) to this legendary happy hour party at Seattle’s iconic Pike Brewery. The first two beers and hors d’oeuvres are on us. Awesome door prizes compliments of our generous Bike Month sponsors.

Ride on, eastside! Choose Your Way Bellevue prize patrol will be giving away great prizes all day to people on their bikes in Downtown Bellevue

Bike commuters are invited to stop by a celebration station hosted by Commute Seattle at McGraw Square (5th and Stewart streets) from 7am-9am to receive complementary coffee, bagels and fun prizes on your way to work.

F5 Bike to Work Day Commute Stations
6 to 9 a.m.
All around the Puget Sound region

If you only commute by bike on one day per year, make it F5 Bike to Work Day. Stop by one of dozens of Commute Stations throughout the Puget Sound region to pick up free swag, treats and local bike maps. Have your bike checked for free by our fantastic bike shop partners, and enter the F5 Bike to work Day drawing for your chance to win great prizes. Find a station on your commute route on our online map.

Once again this year riders will meet at KEXP Radio Station to ride downtown together in an awe-inspiring mass of cyclists. While you’re at KEXP, you be able to enjoy music and complimentary coffee, Seattle Bagel Bakery mini-bagels, and bike checks from Performance Bicycle. After a live on-air interview from the Mayor, we will be joined by several prominent local government officials and depart by bike to City Hall at 7:45 a.m. for the big rally!

Depart from Wall and Oakes Ave for a fun-filled ride to Everett Station. All participants receive a commemorative gift and are eligible to win prizes.

UW Trail Party
4 to 7 p.m.
On the Burke-Gilman Trail at the UW campus

This annual event will be held in a bike commuter-friendly University of Washington park, adjacent to the Burke-Gilman Trail between Brooklyn Ave & University Way. We’ll feature music, free drawings every  hour for great prizes, bike tune ups, and other fun giveaways.

Don’t miss this massive bike block party in one of Seattle’s coolest neighborhoods to wrap up Bike Month. Bring your enthusiasm, grab a friend and take to the streets for an evening of bicycle-themed fun for everyone.

In partnership with KEXP we’ll have a live family-friendly music stage featuring local bands, and at 6:30pm you’ll have the opportunity to get up on stage and show off your riding outfit in our “Share Your Style” Fashion Show sponsored by Hub & Bespoke. Great prizes for all who participate!   We will also be announcing several special Bike Month awards, including Team Captain of the year and the Top School  from Bike To School Day

This entry was posted in news and tagged bike month 2013, cascade bicycle club. Bookmark the permalink.

2 Responses to A look ahead at Bike Month