Yes, you can get pulled over for speeding on a bike (especially in a school zone) 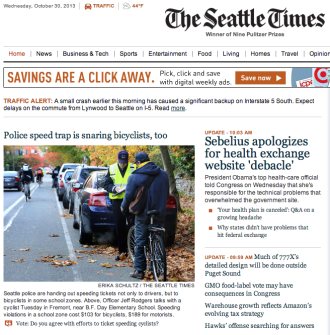 Screenshot shows the story on the front of the Times homepage

Seattle’s Internet is blowing up this morning due to a story in the Seattle Times about a handful of people on bikes getting speeding tickets on Fremont Avenue.

As with other schools, the speed limit next to BF Day Elementary is 20 mph when children are present. And Fremont Ave is steep enough that a person on a bike can get over 20, perhaps even without realizing it.

Bikes rarely have speedometers, but that’s not an allowed excuse for speeding. It’s against the law and dangerous to go faster than 20 in an active school zone. Sure, it’s more dangerous to speed when you’re in control of a two-ton vehicle, but so long as officers dole the tickets out without bias against people on bikes, it’s a fair ticket.

That’s apparently how one person who was nabbed saw the situation. From the Seattle Times:

Standing near a bus stop and crosswalk signal, Rodgers pointed his laser gun up the hill, where it measured speed 450 feet away. He pulled over a hatchback, a brown Jeep and a gray SUV.

Next he measured an orange bicycle at 31 mph, waved the rider to the side, and showed him the digits on the laser device. Another bicyclist stopped and asked if the man was OK.

“Yeah. I was just going too fast,” replied Robert Allyn. His bike lacks a speedometer, and after receiving his $103 citation, he said bicyclists should obey the rules of the road. “It’s not like they’re singling out me,” he said.

The fine for speeding on a bike is lower than speeding in a car: $103 instead of $189. But it can increase your car insurance rates.

The lower cost not only acknowledges that a traffic infraction on a bike is less dangerous than the same infraction in a car, but it also provides an incentive for officers to give more of them without feeling like they are handing out a disproportionate fine.

Davis, California, recently tacked the same issue. Their tickets for bike infractions used to be about $200, which made officers hesitant to hand them out for something as relatively low-priority as a person failing to stop at a stop sign.

Their Bicycle Education and Enforcement Program does several important things. First, it lowers fines to $70 if you also complete an online bike safety course. Once you do both those things, the police will throw out your ticket before it goes on your record (and, thus, goes to your car insurance company if you have one).

Could a similar program work in Seattle/King County?

42 Responses to Yes, you can get pulled over for speeding on a bike (especially in a school zone)