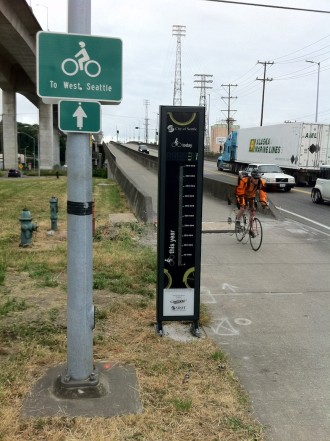 The counter has displays on both sides (the Fremont counter only faces north) and will start providing useful West Seattle bike traffic data online, as well.

While it is almost certain that the numbers will be lower than Fremont, one thing I’m particularly interested to see is if West Seattle traffic is more commute-oriented than Fremont’s. Also, are West Seattle residents more or less likely to bike to work in inclement weather due to the likely longer commute distances?

What other questions do you think this counter might be able to answer?

Bicyclists, now you can ride up and be counted on the  South Spokane Street swing bridge.

The new bike counter on the bridge began operating today. This may be the busiest cycling location in South Seattle, and it is a key route that most cyclists from West Seattle use to access downtown, which is why it was chosen as the site for Seattle’s second Eco-Totem counter.

Located along the east approach to the bridge, the totem counts all cyclists using the shared pathway and notes their direction of travel. This counter is essentially the same as the counter that was installed on the Fremont Bridge in 2012 except this one has a two-sided display. A number representing the daily total for bikes crossing the bridge is displayed along with a ‘bar’ showing the running total for each calendar year, a visual reminder to cyclists that their contribution to protecting the environment, reducing traffic congestion, and promoting healthy life styles is being counted.

Data from the new bike counter will begin appearing on SDOT’s website by tomorrow, http://www.seattle.gov/transportation/bikecounter.htm. As with the Fremont counter, the Spokane Street Eco-Totem is a gift to the City of Seattle from the Cascade Bicycle Club with funding from the Mark and Susan Torrance Foundation that covers installation and the first year of operations.

The new counter is an important addition to SDOT’s data collection program and will allow improved estimates of annual volume to be calculated for spot counts and other shorter-term data collections sites. All of these data sources combine to measure the city’s progress toward getting more people to travel by bike and to help determine what additional bike facilities would be most beneficial.

This entry was posted in news and tagged bike counter, west seattle. Bookmark the permalink.