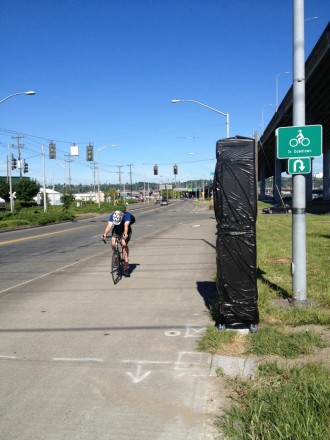 Yesterday was the busiest day yet recorded by the Fremont Bridge bike counter. 5,121 bike trips were made across the bridge, and there are no signs that we’re anywhere near our max yet.

As the Fremont Bridge travelers are just starting to hit their stride, the city is preparing to unveil its second bike counter—this time on the lower West Seattle Bridge.

Users probably noticed the ominous monolith sheathed in plastic on the east end of the bridge. Once it is unveiled, it will start collecting valuable real-time West Seattle bike travel data and, of course, displaying the number of people who bike across the bridge each day.

No official launch date has been announced yet, though SDOT plans to have it ready to go by the end of next week (though technical issues delayed the launch of the Fremont counter in October).

Funding for the counter is from Cascade Bicycle Club and the Mark & Susan Torrance Foundation, same as the Fremont Counter.