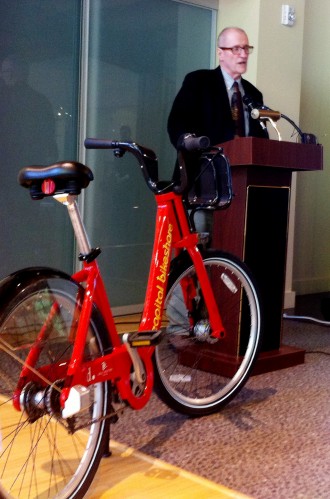 Puget Sound Bike Share is now officially half way to the funding they need to launch Phase I, likely covering the University District, downtown, South Lake Union and some of Capitol Hill.

With a $750,000 state grant secured for launching the system in the University District, PSBS continues to search for both public and private funding sources. Passing the 50 percent mark should give the project the momentum it needs to launch in early 2014 as planned. One big sponsor can still step up to claim branding rights.

PSBS, a non-profit partnership between many government and private organizations, announced recently that they selected Alta to build and run the system.

Details on the recent grant, from SDOT:

The City of Seattle has been awarded a $1 million federal grant from the Puget Sound Regional Council to fund bike and helmet stations in South Lake Union and north downtown. Combined with a $750,000 grant from the Washington State Department of Transportation, Puget Sound Bike Share and its partners at the City of Seattle and King County Metro have now secured $1.75 million in grant funds to fund approximately 30 stations. These stations will be part of the network’s Phase I roll-out in the rapidly growing University District, South Lake Union, Capitol Hill and downtown neighborhoods.

“Bike share stations will connect existing transit options and make it easier for employees, residents and visitors to rely on public transportation,” said Seattle Department of Transportation (SDOT) Director Peter Hahn. “Thanks to the Puget Sound Regional Council, this grant moves us one step closer to fully launching a bike share program in Seattle.”

Founder and Editor of Seattle Bike Blog.
View all posts by Tom Fucoloro →
This entry was posted in news and tagged puget sound bike share, sdot. Bookmark the permalink.