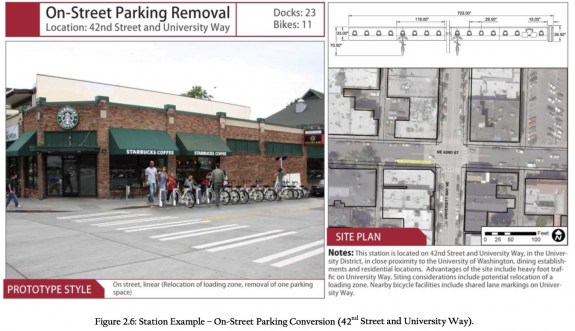 An ordinance making room in city rules for bike share stations is now starting its journey through the City Council.

The initial launch of Puget Sound Bike Share is beyond 50 percent funded, and the non-profit partnership is aiming for a spring 2014 launch. The first areas likely included will be the University District, Eastlake, South Lake Union, downtown, First Hill and parts of Capitol Hill.

Not included in this ordinance is a modification to the city’s rare all-ages helmet law. While Puget Sound Bike Share and vendor Alta Bike Share are working on a helmet vending solution to address the problem, there are still serious concerns that a helmet law could reduce use of the system.

Bike share systems across the globe have proven to be extremely safe. In fact, after the first half million Citibike trips in aggressive, car-clogged New York City, only three people were injured, and all their injuries were minor. Bike share is so safe that a Barcelona study estimated that their system actually saves 12 lives per year due to increased exercise.

While there is little political momentum behind the idea of a helmet law repeal, we have suggested that the city/county could modify the existing helmet law to make it a secondary offense for adults. That way, adults biking safely and lawfully — who are in no way a public safety risk — can do so without fear of a ticket, but people cycling unlawfully will run the risk of getting double-ticketed if they do so without a helmet.