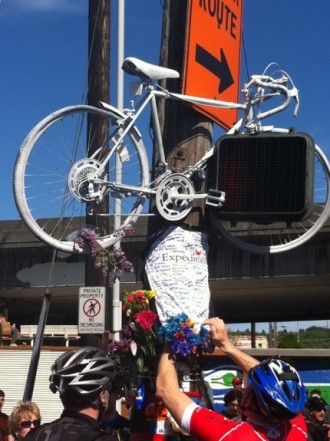 Friends, family and coworkers of Lance David held a bike ride and memorial Friday afternoon, gathering at E Marginal Way and S Hanford Street to honor him and support each other (see photos here).

The collision that took Lance’s life on his bike ride to work May 1 has shaken not only those who knew him, but also many other people who bike the same route regularly.

West Seattle residents, Seattle Neighborhood Greenways, the Port of Seattle and many other partners are joining together for a memorial ride in honor of Lance Tuesday evening. The ride meets at Seacrest Park at 5:30 p.m.

A family and community were devastated by a horrific collision on Wednesday, May 1. Lance David, a careful commuter, loving family man, and valued employee was struck and killed by a collision with a truck being driven on East Marginal Way. It’s the sort of tragedy we hear about far too often, and yet it happens over and over again in our cities where streets are simply not yet designed for the safety of all people.

Please join representatives of West Seattle Bike Connections, Seattle Neighborhood Greenways, Seattle Bicycle Advisory Board, Commute Seattle, West Seattle Spokespeople, Cascade Bicycle Club, the Port of Seattle, and the City of Seattle on a memorial ride to honor Lance David and focus attention on how our community can support streets that are safe, healthy, and livable. We are all part of a growing local movement to actively support safe and healthy streets for people of all ages and abilities. East Marginal Way should be like all Seattle streets — safe for people riding bicycles, hauling freight, walking, and driving cars.

Why: We want the freedom to choose to travel on safe, healthy, livable streets. East Marginal Way is a necessary but hazardous segment of the daily commute for many people going to and from West Seattle by bicycle.  We want to learn from this tragedy, make the commute safer for people in West Seattle, and have our city invest in streets that are safer for people all over Seattle.  We need our streets to be built so our movement is predictable and safe.

Lance David worked in freight and shipping, just like the truck driver involved in the collision.  Shipping company employees, like all of us, depend on safe routes to get us to work and back home again. The people in Seattle all want to live in a healthy, livable city that supports great jobs and gives us freedom to choose how to get to work.

Don Brubeck, co-founder of West Seattle Bike Connections says, “I will never forget seeing Lance and all the emergency vehicles on the road. It could have been any of us. We’ve been trying to make East Marginal Way safer for a long time. We support safe streets for our jobs, for our children, for a healthy environment. And while children may not commute along this stretch of road, our children need to have their moms and dads come home safely.”

Additional details about the memorial ride can be found here:

Participants on this ride support the goals of Seattle’s Road Safety Action Plan to achieve zero fatalities and serious injuries by taking action.  With more effective public policy, better engineering, stricter enforcement and more responsive education, we can work together to prevent thousands of deaths and injuries.

Let’s look out for each other Seattle. Please help us to pay our respects to Lance David and show support for safer, healthier streets! 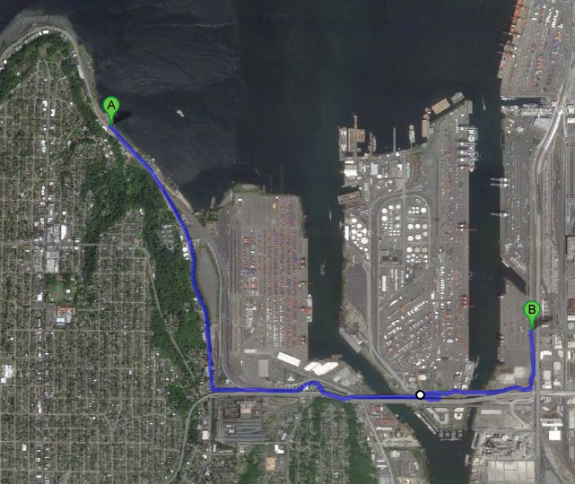 Here’s a King 5 report of a Sunday memorial ride in Redmond: