WA bill would ban right turns on red near schools, parks and other highly-walked areas 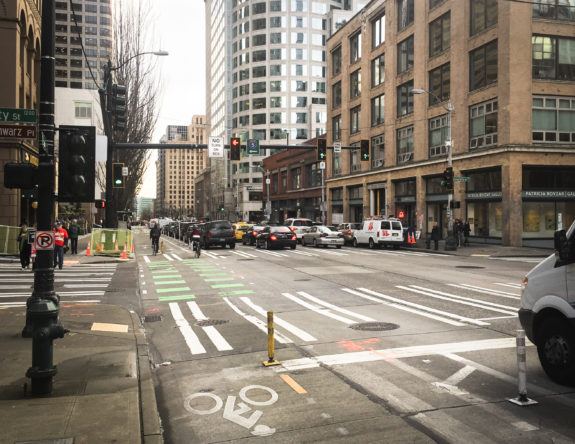 Turns on red would be banned within 1,000 feet of certain places, such as schools, parks, hospitals, senior centers and other public facilities if Senate Bill 5514 passes during the 2023 State Legislative session. The bill—sponsored by Senators John Lovick, Rebecca Saldaña, Noel Frame, Derek Stanford and Marko Liias—is the first attempt in recent memory to ban turns on red in Washington State, a practice that became widespread across the U.S. under dubious pretenses during the Gerald Ford Administration.

Local transportation departments can already choose to ban turns on red on an instance-by-instance basis if traffic engineers deem it appropriate. They just need to post a “No Turn On Red” sign for each turning location. The new law does, however, put additional onus on local jurisdictions to ban turns on red in highly-walked areas, stating that turns on red must be banned at any facility “with high levels of pedestrian traffic as determined by the appropriate local jurisdiction or the department of transportation.”

Agencies will still need to install “No Turn On Red” signs at all relevant locations under the proposed bill. It does not seem to give local governments the ability to ban all turns on red with a simple ordinance. So this could be a good time to pursue your dream of starting a “No Turn On Red” sign-making business.

The bill would also ban turns on red within 1,000 feet of certain locations statewide and require transportation agencies to install the appropriate signs. The itemized list includes:

From my reading of the bill, drivers can only be held responsible for breaking the law if there is a “No Turn On Red” sign present. The bill as currently written also seems to only apply to right turns on red. This is a little confusing since I would assume the same principles also apply to left turns on red, which are generally legal at certain somewhat rare locations where two one-way streets intersect. They could likely revise this by simply dropping the word “right” and just saying “turns on red.”

The bill is an interesting take on the issue, trying a significant yet still more gradual tactic than simply banning the practice statewide. But it’s not clear if the state even can ban turns on red thanks to the federal Energy Policy and Conservation Act of 1975, an act sponsored by Washington Senator Henry M. Jackson. The EPCA did a lot of things in response to the 1970s oil crises, such as creating the strategic petroleum reserve, regulating the energy consumption of consumer goods and creating some fuel economy rules. But the act also required states to allow turns on red if they wanted to receive federal money for conservation programs, so all 50 states quickly adopted the practice.

The practice is even more concerning in recent years as major carmakers push larger and taller cars onto the public, many of which have horrifically obscured visibility directly in front of the vehicle. Walking around Seattle with my kid, who is currently 3’6″, it is terrifying to watch people pull up to a crosswalk in a modern SUV and to realize that the drivers simply cannot see her. The front ends of some of these machines essentially blocks drivers’ views of all or most of the crosswalk. My kid keeps seeking more independence, and I trust her to make the correct decisions about when to cross the street. We have been practicing for years, and she is very good at waiting for the walk signal and then looking both ways to make sure all the cars really are stopping. I walk with her, but I let her make the decision about when to go and when to wait. I have not needed to step in to correct her in a long time. But even if she does everything correctly, it is beyond her control if the person driving through the crosswalk to turn on red is physically incapable of seeing her because of reckless and irresponsible design decisions by major car manufacturers. It’s heartbreaking that kids do not have a fair chance to move around their own neighborhoods just because they are the height of a child. Banning turns on red is an appropriate and needed response to the reality that so many vehicles on our roads have such poor front-end visibility. U.S. vehicles are no longer compatible with turning on red.

It’s difficult and likely impossible to quantify exactly how much excess fuel has been burned because our nation’s crosswalks were sullied by turn on red laws in 1970s, but I am willing to bet the figure is far larger than the supposed fuel savings from car engines idling less. After all, giving more time and space to cars leads people to drive more. And taking time and space from people walking makes people walk less. Walking does not burn any oil.

So if we decide, as I hope we do, that Washington needs to ban or severely limit turns on red, what is the best way to get there? Given that generations of drivers have been driving with legal turns on red, maybe installing “No Turn On Red” signs at every intersection really is the best way to achieve the goal. We’re talking about an enormous number of signs here. But I’m not sure that trying to change the law without the signs would work as well. After all, we are trying to change the behavior, not just make it illegal. So I say, let’s get those sign shops to work.

Founder and Editor of Seattle Bike Blog.
View all posts by Tom Fucoloro →
This entry was posted in news and tagged 2023 legislature, right turns on red, SB 5514. Bookmark the permalink.

15 Responses to WA bill would ban right turns on red near schools, parks and other highly-walked areas