How bikeable are the roads and paths near you? – UPDATED

PM UPDATE: It sounds like a lot untreated surfaces have turned to smooth ice after sundown. Take care. 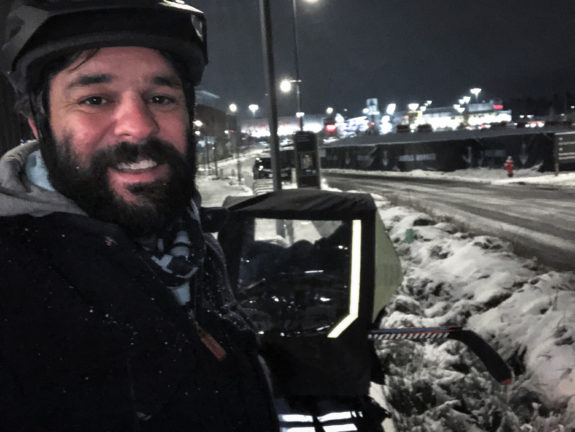 I biked to play hockey last night, and the roads between the U District and Kraken Community Iceplex in Northgate were in fairly good condition. As noted in our post yesterday, the city prioritizes arterial streets and bus routes for plowing and treating. So I followed my own advice and stuck to the roads that the city’s real-time slow plow map noted as being recently treated. And it worked! The sketchiest parts of the whole ride were the neighborhood streets near my house and the parking lot access roads at the rink.

But just be aware that the forecast says it will stay below freezing for the next couple days, so uncleared and untreated surfaces can easily turn to ice. Metal surfaces and bridges typically freeze first.

Bob Svercl shared this morning’s road conditions for folks biking from Beacon Hill to downtown. Remember that if a bike lane is not cleared, you can and should ride in the general traffic lanes. Take the space you need to be safe, and don’t feel the need to hug the side of the road. Your safety is paramount.

The status of trails across the region are mostly unknown. Many trails are likely untreated and might be icy. The Sumner Link Trail will be closed through the weekend due to flooding concerns:

The #Sumner Link Trail is closed through the weekend for ice now and anticipated high water from the White River over the weekend. pic.twitter.com/76fJJv4aNr

Let us know the status of biking conditions where you are. The weather forecast suggests that the current conditions will likely linger for the next couple days. If there are any particularly problematic spots where you worry someone might get hurt, definitely say something in the comments below and attempt to report it to your local government. In Seattle, you can use Find It Fix It or call 206.684-ROAD to file a work request.

the burke is a mess of on-and-off ice. clear in the sun, very dangerous in the shade pic.twitter.com/lDASfhDUDZ

Without studded tires, I would not have been able to make it to work today. Montlake Bridge was terrible. Climbed 21st Ave E and found out it was closed at the top. Ha! Will choose another route on the way home. pic.twitter.com/M7ij603qM1

Interlaken was ice in the morning. Doubt it got much better without much direct sunlight. Going to be ice in the evening again for sure.

Not too shocked to be the only bike on the water taxi this morning.

My ride on the Vashon side was pretty easy. Seattle side, not so much. Yesler and Broadway bike lanes are both sheets of ice.

Last night from WS/Delridge to downtown:

12th Ave and Union St bike lanes are unusable due to ice right now, so be prepared to bike in traffic. Wish SDOT would salt and grit the bike lanes when they do the rest of the roadway. Sidewalks are completely variable. https://t.co/JEFHC6IQGE pic.twitter.com/qpu4pQwTR0

Big thanks to Luke from @seattledot for plowing and salting the pike street bike lane! pic.twitter.com/u5u3Dc6sfS

2 Responses to How bikeable are the roads and paths near you? – UPDATED