Cascade announces 2023 events, including long-awaited returns of RSVP and the Emerald City Ride 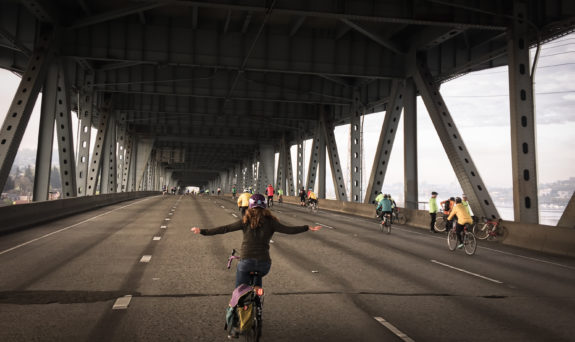 Cascade Bicycle Club this week released its first full-strength events schedule since 2019. The 2023 season will see the return of two major rides that have been sadly missing in recent years: The Emerald City Ride and the Ride Seattle to Vancouver and Party (“RSVP”).

The Emerald City Ride launched in 2016 as an annual opportunity to bike on area freeways, a tradition that dates back to the 1970s but was mostly forgotten in the late 1980s. The date and route for the ride is not yet announced, but it’s on the list. Cascade notes that they “hope to announce an Emerald City Ride date in early 2023.”

RSVP was also impossible during the past three summers due to travel restrictions between Canada and the US. Insiders know that RSVP is actually more fun than STP, but they don’t share this information widely because spaces are more limited. But I’ve just let the cat out of the bag (or as our Canadian friends might say, “cat oat of the bag”). Cascade still lists RSVP as tentative, but they are clearly trying hard to make it happen.

It’s been a long time coming for the full Cascade events lineup to return. Events are a huge source of income for Cascade and Washington Bikes, so the past years of cancellations have been tough. A lot of great staff were let go in 2020, and they organization has been rebuilding under Executive Director Lee Lambert, who took the helm September 2021. The Cascade of 2023 will be very different than the Cascade of 2019. From what I can tell, there is a lot of good energy there these days.

Below is the schedule as of December 2, 2022. Check the Cascade website for the most updated info as some dates and details may change.