To learn how to respond to community-created crosswalks, SDOT should look to their own past 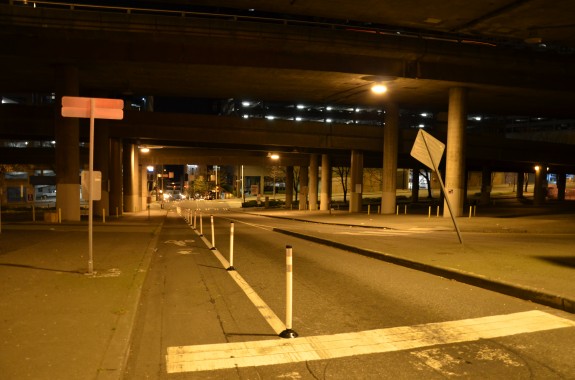 In the dead of night in early April 2013, one First Hill resident dragged $350 worth of reflective plastic posts down the hill and glued them on top of the brand new bike lane line SDOT had painted on Cherry Street under I-5. He then went home and wrote an email to Seattle Bike Blog with a cc to then-Director of SDOT Peter Hahn explaining his action. He called himself the Reasonably Polite Seattleites.

A “guerilla” bike lane was already an interesting story, but it was SDOT’s response that attracted national and global attention. Yes, the department sent out a crew to remove the posts, which did not conform to standards. But SDOT’s new Traffic Engineer Dongho Chang surprised everyone when he apologized to the Reasonably Polite Seattleites for needing to remove the posts, thanked them for their statement about the need for more bike lane protection, and then offered to return the posts. But it didn’t end there. Within months, SDOT crews were out installing plastic posts as an official city engineered project.

I know that today’s SDOT is aware of the story of the Reasonably Polite Seattleites, but judging by this week’s response to a community-created crosswalk on Capitol Hill, they may have missed the lesson it can teach them. Dongho making that Cherry Street bike lane official did not set off a string of other unofficial bike lanes across the city. His thoughtful response did not embolden people to take matters into their own hands to get their desired improvements completed. It did the exact opposite. It communicated to people that they don’t need to do this themselves because SDOT was going to do better. And they did. The number of protected bike lanes they installed increased dramatically after 2013 thanks to the department’s commitment to the revised Bicycle Master Plan.

This week, SDOT presented a gruff and authoritative stance against the painters of the Olive Way crosswalk, writing on Twitter, “Improperly painted crosswalks give a false sense of safety which puts pedestrians in danger. There are better ways for people to work w/ us to indicate crossing improvement needs & to make sure changes achieve what is intended — get people to their destinations safely.”

People have responded adversarially as you would expect because the whole point of the crosswalk action (I assume since I don’t actually know the painter’s intent) was to highlight the city’s lack of urgency in painting official ones. It comes off as though the agency is more concerned about defending its domain over street changes than it is about creating safe places for people to cross the street.

Someone who is so concerned about street safety that they are willing to go out and paint a crosswalk with their own time and money is not SDOT’s adversary. They are providing feedback that SDOT’s current processes for making official crosswalks is not working. If it was, they would have just filled out the proper form.

If SDOT wants people to stop painting crosswalks, then they need to create a reliable and responsive way for people to make such requests and then see them happen within a reasonable time frame. Wagging your finger at people and telling them that the existing system is fine is the surest way to guarantee someone else is at the hardware store right now buying a can of white paint.

It took SDOT 24 hours to remove this crosswalk.

We need to bring that same energy to creating crosswalks, sidewalks, and bike paths in South Seattle.

We know it can be done. https://t.co/MtJmKONSIx

1 Response to To learn how to respond to community-created crosswalks, SDOT should look to their own past