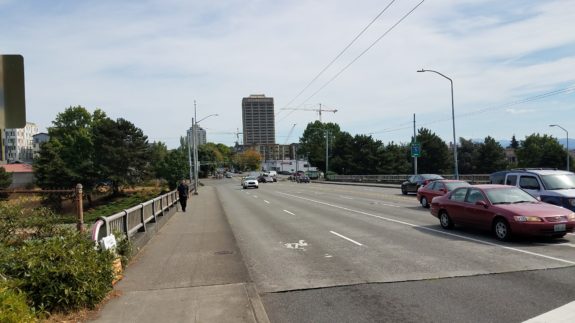 A railing on this sidewalk will not make this bridge a safe and usable bike route. Note the desecrated sharrow representing how it feels to bike there.

Amid all the tough cuts to the proposed 2023-24 budget, including $4 million over two year from the sidewalk safety repair budget, one curious project is getting funding: A railing and some lighting on the NE 45th Street bridge over I-5.

Don’t get me wrong, the NE 45th Street overpass desperately needs safety improvements. I should know since I live less than two blocks away and bike or walk across this bridge daily. I personally appreciate that Councilmember Alex Pedersen has been pushing for investments to improve this bridge. But the project has developed all wrong and needs a total reset before getting a dime for construction. Worse, the specific “improvements” cited in the budget text would do next to nothing to address the real safety and mobility issues on the bridge while also potentially limiting future redesign options.

The budget action would use $1.5 million in funds raised by a $10 increase to Seattle’s vehicle license fee to build “pedestrian and bicycle safety improvements on the NE 45th St structure crossing Interstate 5 including, but not limited to, interior and external fencing of pedestrian and bicycle crossing space, and lighting improvements,” according to the November 14 draft of the initial balancing package (PDF page 120). What they are calling a “pedestrian and bicycle crossing space” is actually just a sidewalk that is in no way set up for bicycling. People do bike there, but only because biking in the roadway can be extremely stressful. The sidewalk is not wide enough to serve as a multi-use trail, and adding a railing would potentially reduce this space even further. But worse, there is no usable connection on either end of the bridge for someone try to bike between Wallingford and the U District.

The process that led to this point was frustrating because WSDOT said no to the kinds of changes that are actually needed to make this a safe and usable bike connection. The project needs a total reset, and this time we need WSDOT to be a genuine partner in safety with the community and with SDOT. We need to start all over and put bike lanes and neighborhood connections back on the priority list.

This is where my concerns with the railings come in. It is possible designing safe and protected bike lanes on the bridge would require modifying the existing curbline to create space for both a sidewalk and protected bike lanes. The presence of a railing would likely constrain these options. Here’s an example I found in my Streetmix drafts from back in early 2021:

I’m not saying this is the version they need to build, but my point is that the existing curb would have to be modified to make this or many other options work.

If the City Council moves forward with this funding, they should consider rewording it to remove a railing from the requirements and add a proviso that the project must include protected bike lanes in both directions. Otherwise, as much as it truly sucks to say it as a user of this terrible bridge, the money should go to more deserving investments.

Founder and Editor of Seattle Bike Blog.
View all posts by Tom Fucoloro →
This entry was posted in news and tagged 2023 budget, ne 45th, sdot, u district, wallingford, wsdot. Bookmark the permalink.