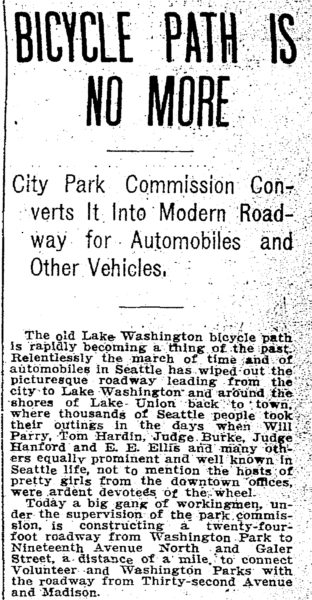 From the June 23, 1905 issue of The Seattle Daily Times. Male newswriters back then were seemingly incapable of writing about bicycling without saying something pervy about women who biked.

The Lake Washington Bike Path turns 125 this year! Or it would if it weren’t torn up in 1905 to build Interlaken Boulevard.

Bill Thorness, author of “Cycling the Pacific Coast” and “Biking Puget Sound,” wrote a story for the Seattle Times about the history of the old path. Thorness also spoke with yours truly to fill out some of the history:

In a way, said Tom Fucoloro of Seattle Bike Blog, “bike paths themselves shaped the city.” The city’s roads, its neighborhoods, and parks like Roanoke Park got their start thanks to bicyclists.

Fucoloro, whose book on Seattle’s cycling history, “Pedaling Uphill in the Rain,” is due out from University of Washington Press next year, said that, as the last decade of the 19th century began, “Seattle was behind the bike craze because there wasn’t anywhere to ride your bike.” A bike path network was envisioned. Cotterill, who would later become mayor and was also a leader of the Queen City Cycling Club, traced 25 miles of paths around the city.

Fevered bike club members raised money, volunteered labor and lobbied for progress. Along with the trail to Lake Washington, another traced Magnolia Bluff to what is now Discovery Park. They encircled Lake Union, went to Fremont, linked to Ballard, then went on to Green Lake and circled that, too. Many of those areas had yet to be platted for homes.

Thorness is leading a Lake Washington Bike Path history ride June 19, and there are still a few spots left. Tickets are $50, which will go to the Phinney Neighborhood Association.

If you’re into the history of this path, you should watch my video where I searched for remnants of the old path route.

2 Responses to Thorness: Celebrating the 125th anniversary of the Lake Washington Bike Path