In 1896, Seattle city crews and a group of volunteers worked together to build a bike path from downtown to Lake Washington. They made it quickly, following the terrain around the north end of Capitol Hill to find the easiest route. They cleared the skinny path and dug as needed to make it mostly flat, then they covered it with cinders and ash. For less than a decade, biking out on this path was a very popular activity, and it helped promote the city’s first major bike boom. But by 1905, most of the route had either vanished or was being developed into a boulevard.

One of the most iconic sections was through what is now Interlaken Park. It was not unheard of for people to encounter a bear while biking through the deep woods of Interlaken, and much of the route of the old path was immortalized when the Olmsted Brothers used it as the guide for Interlaken Boulevard.

But a path paved with ashes and often routed through private property did not last long. Property development closed some sections while nature took care of others. Still, I was curious if I could find any hints today that the old path ever existed. Jonathan, a Seattle Bike Blog reader, sent me an old hand-drawn plot city engineers used to construct the 1896 path. I traced that plot into a Google Map that I could follow on my phone, and then set out to follow it.

Did I find the old path? Watch the video to find out. 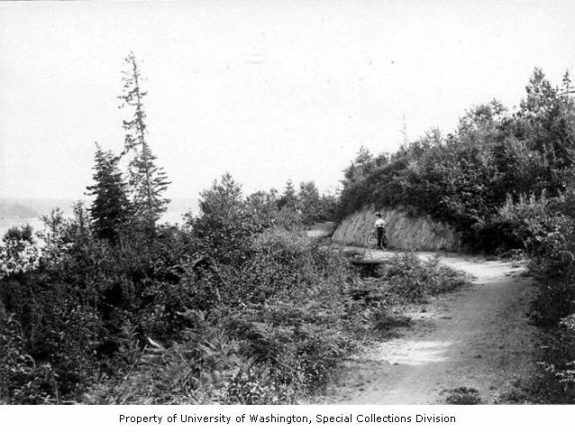 Founder and Editor of Seattle Bike Blog.
View all posts by Tom Fucoloro →
This entry was posted in news and tagged history, interlaken, videos. Bookmark the permalink.

14 Responses to Watch: Searching for the 125-year-old Interlaken bike path