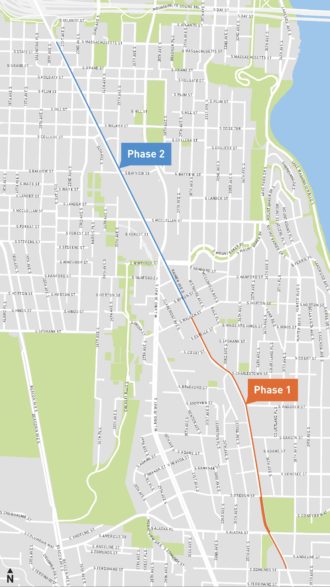 The good news is that  SDOT is redesigning one of the worst stretches of roadway in the city: Rainier Avenue S between Columbia City and I-90. The bad news is that their design still prioritizes car movement above transit mobility and safety, especially for people walking and biking.

This design is simply not good enough. We are in the midst of a serious road safety crisis, especially in South Seattle. This roadway is very wide and is the only direct route between Rainier Valley and the city center. It must be safe and accessible for everyone. As Councilmember Tammy Morales said this week, “There is no excuse for not increasing the safety of our streets and sidewalks for the people of Seattle.”

At the bottom of SDOT’s project page for the Rainier project, staff responded to the consistent and persistent request from residents that the roadway should have safe bike lanes. As first noted by Ryan Packer, the response reveals a frankly terrifying lack of understanding of both the law and the city’s existing plans and policies concerning bicycling. It unfortunately needs a line-by-line analysis:

We’ve heard that Rainier Ave S is an important street for people biking because it is often the flattest and most direct route.

Yep! So they know that bike lanes are needed.

Rainier Ave S is also an important and frequently used route for transit, freight, and other vehicles. We must balance these needs and priorities when making decisions about changes to the street and the limited right-of-way space.

“Balance these needs.” On this metaphorical scale, how much does a person’s life weigh?

To date, we’ve heard that the community’s top two priorities for Rainier Ave S are to reduce crashes and keep buses moving.

“Reduce crashes.” Notice how this is actually a different goal than “safety.” People walking and biking are involved in about 7% of Seattle traffic collisions, but they account for 66% of traffic deaths. We are not asking for a general reduction in crashes, we are asking for specific safety improvements.

People biking in curb-side bus lanes should remember that transit has the priority and buses will often make in-lane stops.

This is extremely wrong and a bit troubling. Buses do not have priority over people biking even in a bus lane. The regular rules of the road apply. If a person is biking in the bus lane, then the bus driver needs to follow RCW 46.61.110 like any other vehicle driver. That means they must “move completely into a lane to the left of the right lane when it is safe to do so.” If the city does not want someone on a bike to be in the way of buses, then they need to build a bike lane.

People biking in bus-only lanes also need to follow the rules of Washington State law, including riding as near to the right side of the lane as possible if traveling at a slower speed than the rest of traffic.

This is also extremely wrong and a bit troubling. The law absolutely and very intentionally does not say a person biking must ride “as near to the right side of the lane as possible.” (emphasis mine). It says they “shall ride as near to the right side of the right through lane as is safe.” People biking are allowed to ride in the lane position that best keeps them safe because of course they are. It is simply unsafe to squeeze next to the curb to allow a car or a giant bus to pass you, and nobody should do this. Your life and safety is the most important priority at all times.

While bike lanes are not currently planned for Rainier Ave S, nor are they included in the Bike Master Plan, we are making other changes to Rainier Ave S that will improve conditions for people walking, biking, and rolling.

Rainier Ave S is, in fact, included in the Bike Master Plan. It was included as a part of the plan’s top-priority “Citywide Network,” which is why it got a thick blue line representing “protected bike lane.” The project team linked to the plan, but they apparently never bothered to look at it. I don’t understand how this happened, but it’s a sign that they need to go back and redo their work. 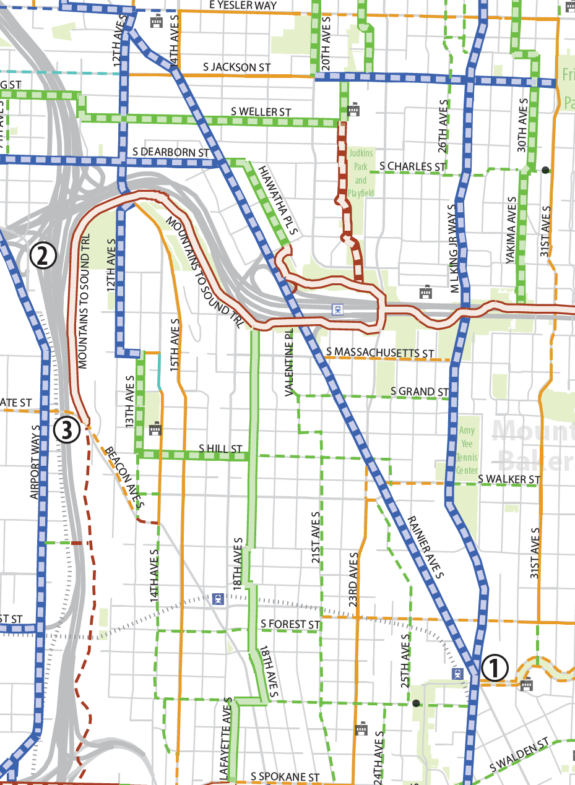 Seattle must do better, and we need our city leaders to demand as much from SDOT. This project will do almost nothing to make our city better. For the busiest stretch of the road, it will add a bus lane in only one direction. The excuse for not building a planned and frequently requested (perhaps the most-requested) bike lane is that they need to “balance the needs” of all road users. But then they present a design with four lanes for cars, one lane for buses and zero lanes for bike safety. Even in the stretch with two bus lanes, they have three lanes for driving cars and one lane for parking cars with zero lanes for biking. This is not “balanced.” SDOT is prioritizing car users above everyone else, then giving buses the first bite as the table scraps. 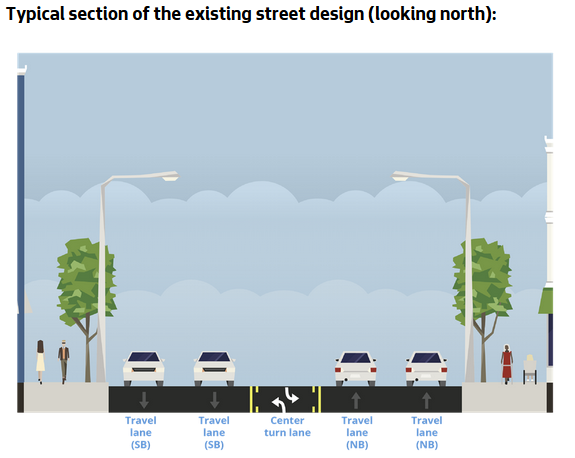 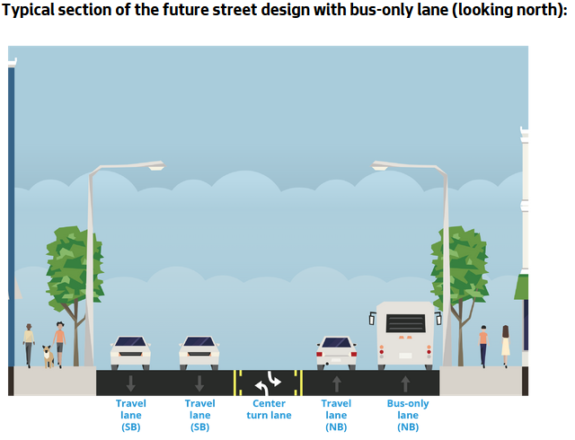 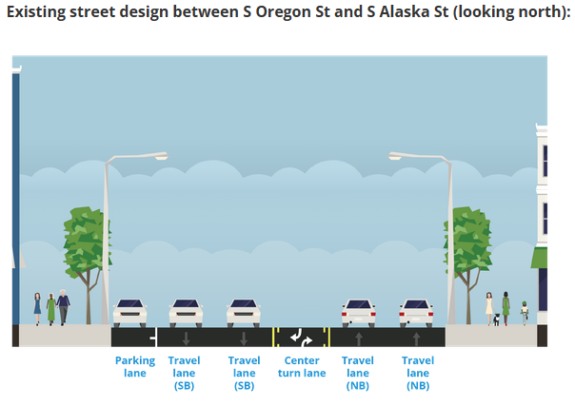 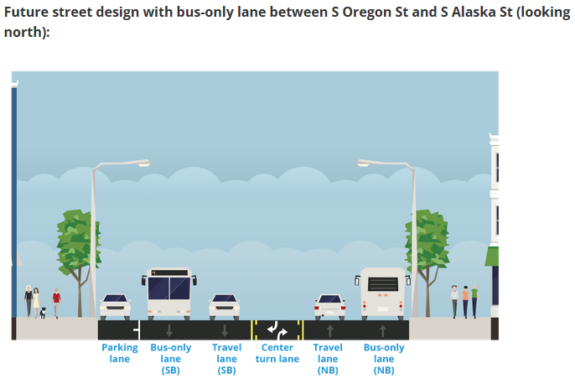 Our city is not going to make any progress toward Vision Zero until we start making actual, real changes to how our streets function. People should be able to safely bike along this flat and direct route, and they should be able to walk across the street. This is not too much for the people to ask of their city.

The planned design will allow the street’s traffic carnage to continue unimpeded. It also goes against our city’s existing policies for safe streets. The street is included in the Bicycle Master Plan and is noted in the Vision Zero Program’s map of “High Injury Streets.” The city’s 2020 Traffic Report (using 2019 data, the most recent non-pandemic year) shows that this stretch of Rainier is very dangerous for people walking. There is no reason the city should allow these collisions to continue to happen year after year after year.

Seven years ago this week, then-Councilmember Bruce Harrell stood in front of a group of neighbors protesting the dangerous conditions on Rainier Avenue S and said, “What I have in back of me is basically a freeway.” Then, after outlining the city’s planned safety project there, he said, “This is the beginning of what we’re gonna do with Rainier Avenue. We’re gonna take our street back.”

Harrell is now the Mayor, and he has the power to send directives through the SDOT chain of leadership to make his 2015 words reality. This is a great opportunity for his administration to show how the city will follow through with its transportation promises and make our streets better and safer for everyone.