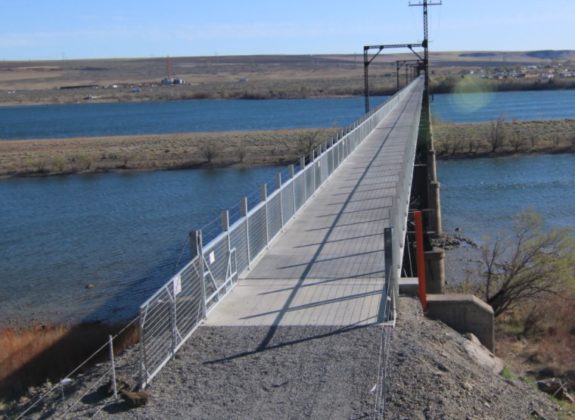 The most difficult gap in the nearly-statewide Palouse-to-Cascades Trail is now fixed, and in stunning fashion. The 3,052-foot-long Beverly Bridge over the Columbia River promises to usher in a new era for the statewide trail formerly known as the Iron Horse Trail or the John Wayne Pioneer Trail, connecting the western and eastern halves of the state in a way that simply was not possible before.

The trail bridge has been operational for a while, but it will get its official springtime opening celebration at 1 p.m. April 8 on the west side of the river.

This is a good time to start planning an adventure on the trail. The Snoqualmie Tunnel at the pass is still closed for probably another month or so (the current anticipated opening is May 1, but that date can change based on the snowpack). The further east you go, the more planning is needed. There are still quite a few detours along the way, and some stretches are very remote with limited water access. The Palouse-to-Cascades Trail Coalition has excellent guides to help you prepare, including detour maps and options for camping and services along the way.

Hopes for a Columbia River trail crossing were dashed in 2014 when a wildfire severely damaged the structure of the old rail bridge across the river. Then one year later, a secretive addition to the state budget nearly gave away the public’s interest in the statewide rail corridor, but a typo saved the change from going through. The near loss of this precious and irreplaceable public amenity woke people up, and legislators decided to fund major rehabilitation work to help get the trail into working order.

Sadly, one person died last year while working on the Beverly Bridge rehab project. Gabriel Zalaya, a father of three, fell from the the structure and died in August. He was 39. The Washington State Department of Labor and Industries fined contractor Boss Construction $284,000 for a number of safety failures at the worksite following the tragedy, including a lack of fall protection for workers and a lack of proper rescue equipment.

More details on the opening from the Palouse to Cascades Trail Coalition:

Completed in 1909 by the Chicago Milwaukee St. Paul and Pacific Railroad as part of its western expansion to Tacoma from Chicago, the Beverly Bridge is 3,052 feet long and 69 feet above the river. The railroad abandoned operations in the 1970’s and the State of Washington acquired the railroad’s property including the Beverly Bridge in 1981.

The bridge is owned by the Washington State Department of Natural Resources (DNR) but was renovated by and is managed by the Washington State Parks and Recreation Commission (WA State Parks). In addition to the DNR and WA State Parks, the renovation involved collaboration by the Cascade Rail Foundation, the Washington Trust for Historic Preservation, the Department of Archaeology and Historic Preservation, and the Palouse to Cascades Trail Coalition, which elevated interest in and enthusiasm for the bridge renovation, as well as supporting funding for the project. Renovation costs were included in the WA State Legislature’s capital budget for 2019-2021.

The official Dedication Ceremony is April 8th, 2022 at 1PM, at the Huntzinger Road trailhead on the west side of the Columbia River.