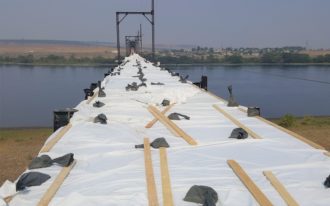 Last month, Gabriel Zalaya was working on the state project to rehab the Beverly Bridge over the Columbia River when he fell and was killed. He was 39.

A contractor for the State is rehabilitating the historic Beverly Railroad Bridge as part of the state-spanning Palouse-to-Cascades Trail. The bridge was heavily damaged by a wildfire in 2014, and is scheduled to reopen very soon. The opening celebration initially scheduled for September 13 has been postponed in part due to Zelaya’s tragic death.

A GoFundMe has been set up to support his three kids and their mother, according to her brother Manny:

Gabriel Zelaya had big dreams of buying a home for his kids, giving his kids a bright future, a life he never had as a kid, he had a rough life as he was growing up in California. He decided to move to Washington state 3yrs ago to give his family a better life. 3 weeks ago he decided to switch to a better job, working in bridge construction and maintenance, just to have a horrible accident, falling off a 70 foot bridge. He never made it home to his kids that tragic day. My sister is not receiving any pension due to not being legally married so its not a lot of help she is receiving.

The Kittitas County Sheriff’s Office and the Washington State Department of Labor and Industries are conducting independent investigations of the tragedy.

More details on the fatal fall, from Kittitas County:

On August 3, 2021 at 2:49 pm, a worker on the project to restore the Beverly Railroad Bridge near Vantage died after falling approximately seventy feet to an island below.

39 year old Gabriel Zelaya was employed by a private contractor working on the new concrete decking of the historic Beverly railroad trestle, which will link portions of the Palouse-to-Cascades trail on either side of the Columbia River. While at work on the project, Mr. Zelaya fell from the bridge to an island in the middle of the Columbia.

Deputies from the Kittitas County Sheriff’s Office responded along with Kittitas Valley Fire and Rescue. Medics were transported to the island on a boat from the Grant County Public Utility District to recover and treat Mr. Zelaya; but he succumbed to his injuries before he could be airlifted.