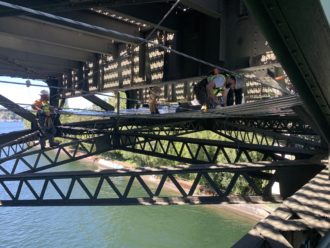 We have a good news update about the ongoing Montlake Bridge rehabilitation work. The first of several weekend closures is still scheduled for this weekend (September 10–12). But despite original announcements, the west sidewalk will remain open for walking and biking after all.

Crews recently finished replacing the metal decking on the bridge, which required major car and bus detours. The next phase of work is focused on the mechanical elements that raise and lower the historic bascule bridge. Some of that work will likely require keeping the bridge in the up position, which will obviously mean no biking or walking. But not this first weekend, which is great news for people looking to bike to the Let’s Move Redmond open streets festival Sunday.

The second phase of work will repair and replace mechanical components that raise and lower the bridge. Access to vehicles will be restricted during working weekends. Pedestrian and bicycle may also be restricted at times. Boats will be able to access the Montlake Cut below the bridge. Crews expect to close the bridge on the following weekends from 11 p.m. Friday to 5 a.m. Monday. This schedule is subject to change:

Founder and Editor of Seattle Bike Blog.
View all posts by Tom Fucoloro →
This entry was posted in news and tagged Bike Route Alert, montlake bridge, wsdot. Bookmark the permalink.