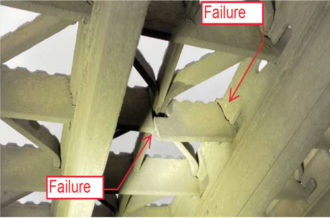 Yeah, they should probably fix this. Photo from WSDOT.

The state is starting work on a significant Montlake Bridge repair project, which includes replacing all the metal roadway decking and maintaining the moving mechanism. This will lead to major closures for cars and buses. But because crews will keep the sidewalks open when the bridge deck is closed, there should only intermittent and limited closures for people walking and biking.

First, work crews “will restrict access on the east bridge sidewalk from 6 a.m. to 7 p.m.” August 2–6. So plan for a little extra time in your trip to cross to the west sidewalk at the E Shelby Street signal. That sidewalk will likely also be more crowded than usual.

But it is great news that the sidewalks will remain open during the 26-day full closure to motor vehicles starting August 9. The bike detour options for the Montlake Bridge are really tough, especially because heavy traffic makes biking on Boyer Ave E to the U Bridge even worse than it usually is. So to whoever made sure the sidewalks were open during this work, thank you for making that a priority.

If you rely on any of the buses that cross the bridge, however, be ready for a major disruption and significant rerouting. Or bike if you can.

There will be a series of four full-weekend closures in September and October when the bridge will need to be held in the raised position so crews can maintain the mechanical components. From 11 p.m. Friday to 5 a.m. Monday during these weekends, people biking will unfortunately need to detour to the U Bridge:

The SR-520 project will take advantage of the closed Montlake Bridge in August by conducting a major soil rehab project at the location of the old gas station at Montlake Blvd and Lake Washington Blvd. This work will close the west sidewalk and all but two lanes of traffic there, but it appears the east sidewalk should remain open.

Founder and Editor of Seattle Bike Blog.
View all posts by Tom Fucoloro →
This entry was posted in news and tagged Bike Route Alert, montlake bridge. Bookmark the permalink.