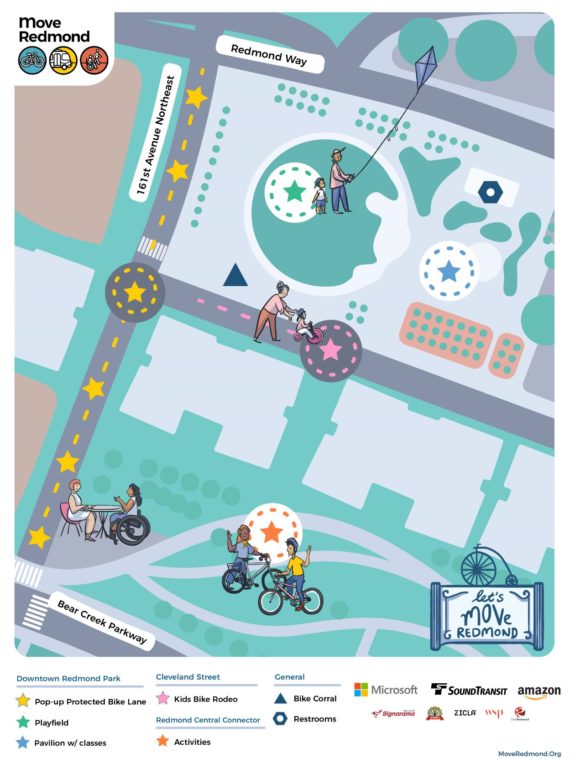 With a pop-up bike protected bike lane, a kids bike rodeo, a roller disco dance party and more, the streets of downtown Redmond are set to be the place to be Sunday. The event runs from 10 a.m. to 2 p.m. between the Central Connector trail and Downtown Park along 161st Ave NE.

And no, I’m not just saying this because my wonderful spouse Kelli is one of the organizers of the Let’s Move Redmond open streets festival (though she really is wonderful). Open streets events are the best, and it’s always very exciting to see a brand new effort get going.

This Sunday, 161st Avenue and Cleveland Street in Downtown Redmond will be open to people walking, biking, roller skating, scooting, and playing. The ‘Let’s Move Redmond’ open street festival will connect the Redmond Central Connector with Downtown Park along 161st Ave and fill the streets with fun activities for the whole family. Open Streets events are celebrated around the world and focus on opening streets so people can move and play. This is the first Open Streets event in Redmond, WA.

“Opening up our streets to people biking, walking, and rolling is a great way for those who live or work in Redmond to connect, play, and reimagine our streets as safe places for people,” said Kirk Hovenkotter, Executive Director at Move Redmond.

‘Let’s Move Redmond’ celebrates movement, transportation, and play. Attendees will get the chance to move their bodies and get active in fun ways, with a group run, classes like yoga, Zumba, and Dance Fitness. There will also be a kid’s bike rodeo, where children can practice their bike handling skills. Be sure to grab your roller skates or rollerblades for a roller disco dance party at 1:30.

This event will also encourage people to try new ways of getting around. ‘Let’s Move Redmond’ will feature a pop-up protected bike lane so people can feel what it is like to ride bikes and scooters in a low-stress bike lane. Participants will also learn more about Move Redmond’s campaign to build a protected bike lane network that will link trails to key destinations to the places people need to go. Attendees of ‘Let’s Move Redmond’ can test out a Spin Scooter, practice putting their bike on the bus with a demonstration bus bike rack from Sportworks.

Move Redmond would like to thank the sponsors who made this event possible: Microsoft, Amazon, Sound Transit, King County Metro, Mayuri, 425 Fitness, Eastrail Partners, One Redmond, Signarama, WSP, and ZICLA

More information about the event can be found at Moveredmond.org/letsmoveredmond. Bring you mask! We will share one with you if you need it.