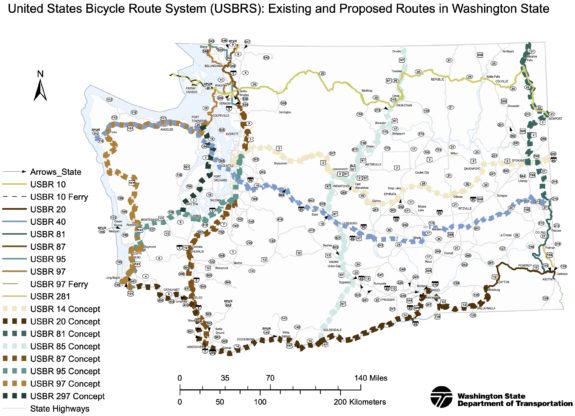 WSDOT has started four new U.S. Bicycle Routes in southeast Washington, establishing Clarkston along the Snake River and Tekoa along the Palouse to Cascades Trail as long-distance bike route nexuses.

The US Bike Route system is a vision for a connected network of bicycle routes spanning the nation, making it easier to travel by bike and encouraging economic activity in communities off the beaten path. Being designated a USBR is largely symbolic, though there are hopes it will someday be much more than that. Official designation does make them “eligible for national and global promotion,” according to the WSDOT press release. It also allows the state to install official USBR signage. But it doesn’t mean USDOT is sending money to upgrade their bike facilities.

The longest of the new stretches, USBR 81, connects Clarkston to Tekoa, passing through Pullman (and Washington State University) on the 104-mile segment. Riders can also take the alternative USBR 281 for a shorter route between Clarkston and Pullman. From Clarkston, just across the border from Lewiston, Idaho, people can head west on USBR 20, which will someday connect to the Tri-Cities, Kennewick and Columbia River routes toward Vancouver, Washington, and beyond. For now, it reaches Lewis and Clark Trail State Park about 77 miles west of the Idaho border.

The shortest of the four new routes is a 2-mile stretch of USBR 40 between Tekoa and the Idaho border. But this route is also one of the most exciting because the bulk of the planned 400-mile route in Washington follows the car-free Palouse to Cascades Trail. Long stretches of this rail-trail are very remote and rough currently, but the state is investing to rehabilitate key trestles and bridges. This work is worth a post of its own, but the next year should be very exciting for this trail and the future USBR 40. So while the USBR designation is not exactly a source of revenue, it does help add to the list of reasons the state should invest in them.

Washington State added its first route to the national network in 2014 with much fanfare. USBR 10 crosses the state along US Highway 20. The national network is also building out slowly, though Washington’s neighboring states do yet not seem in much of a hurry to link up. Oregon does have its own Scenic Bikeways, though they are often loops or short segments and are not in the USBR System.

There’s exciting news for people who desire to travel long distance by bicycle – Washington state is expanding its U.S. Bicycle Route system (pdf 1.8mb) by more than 200 miles by designating four new routes in the southeast corner of the state.

U.S. bike routes direct bicyclists to a preferred route through a city, county or state, and provide options for riders to select among various route choices. These preferred routes tend to have lower vehicle traffic volumes and take advantage of scenic landscapes as well as connect riders to services, parks and points of interest. With the addition of these new route designations, Washington’s USBR system will expand to just over 1,000 miles throughout the state.

The American Association of State Highway and Transportation Officials approved the Washington State Department of Transportation’s latest application for the new USBR segments earlier this week.

The new routes are:

“The U.S. Bicycle Routes are an example of how state highways can serve as critical connections in an overall network for bicycling, as well as support tourism, just as they do for people traveling by car,” said Barb Chamberlain, director of WSDOT’s Active Transportation Division. “Bike travelers stop in more places and spend more on average than those traveling in motor vehicles, so bike routes are especially good for the economy in our small and rural towns.”

The new routes are now eligible for national and global promotion and are authorized to use nationally recognized signage.