Seattle’s November election for Mayor and City Council Position 9 are going to be very close.

King County Elections will drop more ballot results around 4:30 p.m. every weekday until they are all counted. Because later votes in Seattle tend to skew younger and more progressive, the final tally will likely bring both primary results much closer as more ballots are counted over the next week or so. So Tuesday’s count is probably as good as it gets for leading candidates Bruce Harrell and Sara Nelson. If past patterns hold true, Lorena González and Nikkita Oliver will close the gaps in their races to within a few percentage points.

Perhaps the most important data point won’t be the final vote leads themselves but voter turnout. As of Tuesday’s count, turnout was only 18%. That number will climb as more ballots are counted, but will it reach previous mayoral years? Turnout in 2017 was 19% on election night but grew to 41%, a high level that was likely a response to Trump’s election. But if turnout this year can’t even reach the 35% turnout in the 2013 mayoral primary, that’s probably not a good sign for the more progressive candidates. Older and more conservative voters vote earlier and more reliably, so a bigger turnout usually means more young people and a more progressive outcome.

One thing is almost certain: Teresa Mosqueda will keep her City Council seat. She had an overwhelming lead on election night of 55% that will likely grow further. Her leading opponent Kenneth Wilson, who owns a structural engineering firm that worked on the Northgate bike/walk bridge, is a far distant second with 18%. You can see updated results on the King County Elections website. 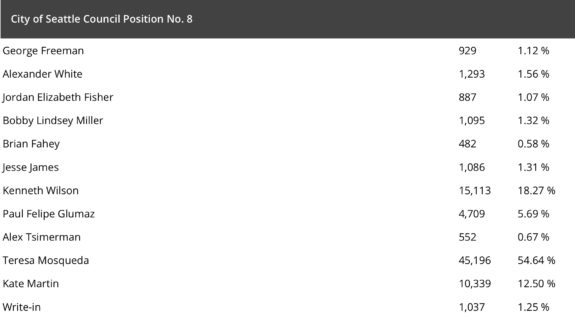 For Council Position 9, Sara Nelson led Nikkita Oliver 42% to 35% on election night. That gap will likely shrink to make this a very close race heading into November. The very impressive Brianna Thomas unfortunately got stuck in the middle and squeezed out of the race. I look forward to seeing what she does next.

The race for City Attorney is biggest unknown. As of election night, it’s effectively a three-way tie. I have no idea what happens next. Does City Attorney follow the same pattern as the Council and Mayoral races? If so, Nicole Thomas-Kennedy will likely climb. But what happens to Pete Holmes, who has been barely contested for several election cycles? We don’t have a lot of history to learn from.

And finally, Mayor. Bruce Harrell held an apparently comfortable 38% lead on election night, but I suspect that lead will get much less comfortable as more votes are counted. With such a crowded field, it is difficult to determine where the voters for losing candidates end up. Lorena González came in second with 29%, a strong performance for the hotly-contested second spot. It felt like Colleen Echohawk’s campaign lost steam in the final month or two, but I was surprised she didn’t do better than 8%. I’m also surprised that Andrew Grant Houston didn’t do better than 3% in the initial drop considering that campaign’s very active organizing and ground game.

Perhaps Houston supporters sensed he was out of contention and jumped ship? This is a strong argument for ranked choice voting, which allows people to vote for several candidates they really want rather than the one candidate they think can win. In Capitol Hill Seattle’s (non-scientific) ranked choice experiment, Houston barely lost out to Harrell for the second spot. In that experiment, the bulk of Echohawk and Farrell votes also went to González, though it’s not clear if this pattern would repeat in the real world.

But with the system we have, it seems that Seattle voters are more likely to take risks with Council votes than with Mayor. With such a crowded field and Harrell a clear favorite to get one of the two spots, people rallied around Council President González rather than going for an outside candidate. 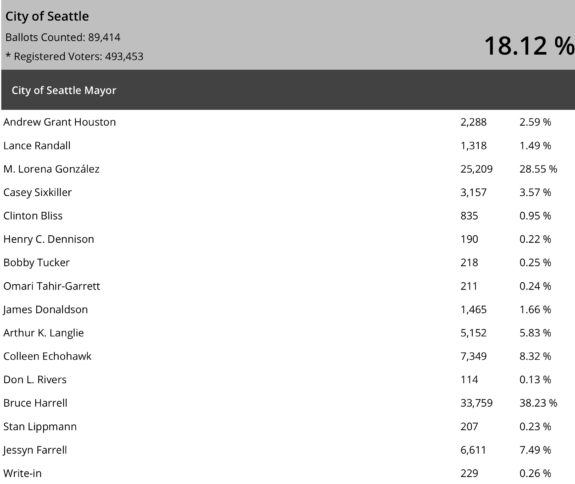 How do you feel about the results? Let us know in the comments below.