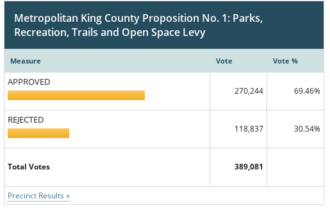 Result as of 4 p.m. Thursday. Next ballot drop is expected Friday afternoon.

With more than two thirds of King County voters supporting it as of the initial ballot drop, the King County Parks levy is passing by a very wide margin. This levy includes millions for major regional trail connections, including funds needed to keep the Eastrail (formerly the “Eastside Raid Corridor Trail”) on track for opening in just a few years. This 42-mile rail trail connecting Redmond, Kirkland, Bellevue and Renton is the single most transformative biking and walking project happening in our region. This is a really big deal.

The levy will also fund the Renton-to-Des Moines Lake to Sound Trail, the final sections of the East Lake Sammamish Trail, the missing Green River Trail link into South Park and a whole lot more. In all, about 20% of levy funding will go to trails. 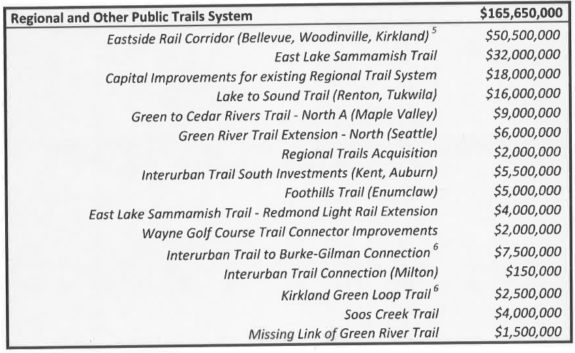 Trail project list from the motion creating the levy (PDF).

So this vote alone makes yesterday’s primary a huge success for biking in our region.

The Seattle City Council races also took shape as the often huge fields of candidates in each district have been whittled down. Most of the worst candidates didn’t make it through (so long, Ari Hoffman), but neither did some great candidates (thanks for running Phyllis!).

Lisa Herbold is in a strong position in District 1, and Tammy Morales is looking very good in District 2.

Zachary DeWolf had a surprisingly poor showing in District 3 considering all the endorsements he had, and Kshama Sawant has a lot of work to do to keep her seat against challenger Egan Orion. She came in first, but not by a comfortable margin.

Seattle Neighborhood Greenways Founder Cathy Tuttle is in third place in District 4 and has an unlikely gap to cover to reach Shaun Scott. These counts are so low that percentages could shift a lot before all votes are counted, but there’s little reason to think Scott’s share would go down since younger voters tend to vote late. In fact, Scott’s very impressive ground game and get out the vote efforts could lead to a shrinking of the margin between him and leading candidate Alex Pedersen by the time all the votes are counted if trends from past elections hold true. Oh, if only Cathy lived a handful of blocks west. We really could have used her in District 6. It seems she just got squeezed out by the Chamber-backed Alex Pedersen and the tireless organizing of Scott. This race is going to be fascinating. Scott’s campaign is going to have to organize the hell out of the district, and it may come down to whether they can get enough UW students registered once they arrive on campus. I think they can do it, but it’s gonna be a lot of work (looking for a volunteer gig?).

Debora Juarez has a good lead in District 5, but we need to keep an eye on Ann Davison Sattler, who gave some very strange answers about bike lane in a Stranger questionnaire (“The 35th Ave NE issue with bike lanes vs parking did not adequately involve stakeholders and now is targeted and used as ransom by council member O’Brien who does not represent nor live in the area.” Huh?).

District 6 is likely to be Dan Strauss vs Heidi Wills. Strauss has given confusing answers about the Missing Link (he wants to complete it, but he wants it to at least partly run on Leary), but Wills has stuck to her nonsense answer that we should build an elevated trail (this wildly expensive idea is effectively just a distraction and excuse to delay the trail further). I really hope Strauss can shift his stance about whether he would back the city’s Missing Link design so that the many, many trail supporters in District 6 can firmly get behind him. Like, he can still prefer it on Leary, but folks need to know he’s not going to fight the city’s design if that’s the one moving forward. Almost nobody wants to reopen the Missing Link fight again. We just need to get it done and move on to other issues.

District 7 is down to Andrew Lewis and Jim Pugel. It will be interesting to see how they jockey for position. Neither has been glowingly great on transportation issues yet, which seems like a valuable place to put some policy efforts going into the general. And no, I’m not talking about rebuilding our freeway-style Magnolia Bridge. I want to hear how you will stand up for Vision Zero, reduce greenhouse gas emissions and complete the Bicycle Master Plan.

UPDATED: Here are the results as of August 7 (current results here):

This entry was posted in news and tagged 2019 primary, king county parks levy. Bookmark the permalink.