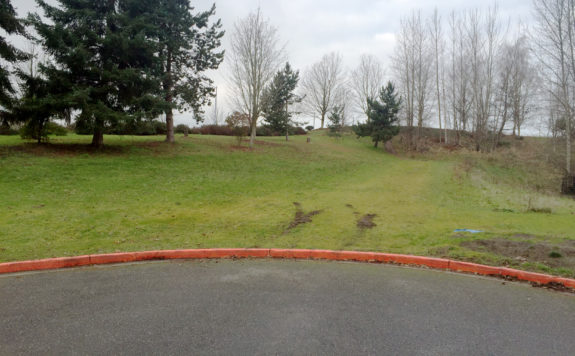 For years, WSDOT has resisted working with Seattle to connect the Rainier Valley Neighborhood Greenway to the Mountains to Sound Trail (AKA the I-90 Trail), according to reporting by Ryan Packer for the Urbanist. Packer requested emails between the two public agencies to uncover why this final connection remains incomplete years after the rest of the route opened, and his findings are extremely frustrating.

The needed connection is very short, spanning a half a block at most from where 28th Ave S abruptly ends and the regional trail just a couple hundred feet beyond. The land the path needs to travel through is already flattened down by people walking and biking across the grass, a clear sign that a pathway is needed here. Also known as “cow paths,” informal walking paths like these show transportation agencies where unmet facilities exist in the communities they serve. 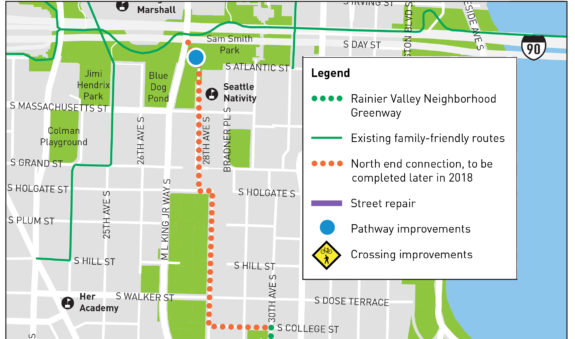 This 2017 construction notice said the “pathway improvement” was coming in 2018. 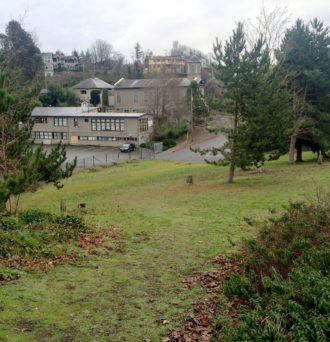 Looking south toward the greenway’s end (photo taken in 2016, but the area sadly hasn’t changed much).

This grass is part of WSDOT’s lid over I-90, which created Sam Smith Park and is home to the I-90 Trail. The I-90 Trail is a major transportation facility of regional importance that includes investments from many agencies along its route including WSDOT. The trail connects some of the state’s largest employment and residential areas. Yet Packer’s reporting shows that WSDOT has put up major road blocks for at lease half a decade to prevent SDOT from building a short trail connecting the local biking and walking network in southeast Seattle to this regional backbone.

“A set of emails obtained by The Urbanist reveal the long battle between SDOT and WSDOT to come to an agreement around use of the property,” Packer reports. “That battle has continued into 2021, when a lease agreement was on the verge of being signed between the state and the city early this year, but city staff were surprised to find that the proposed agreement would have committed SDOT to paying nearly $24,000 per year to WSDOT in perpetuity (tied to inflation) after paying to design construct the trail connection itself.”

Charging $24,000 a year to improve access to their own transportation facility is absurd, and WSDOT lawyers justified that price because the connection is not a highway project, Packer reported:

In September of 2018, WSDOT’s legal division determined that they wouldn’t be able to provide a no-cost trail lease because the trail doesn’t have anything to do with a state highway. “This segment of the [neighborhood greenway] is not adjacent to, severed by, or a part of any state highway. The trail does provide a separation of motor vehicle traffic and pedestrians from municipal streets and routes (increased safety), but not from a state highway. There is no reliever effect, joint use, highway purpose or other benefit to the state. We must pass this test before the state can issue a no consideration trail lease as a highway benefit,” Marty Stickford, Northwest Region Program Manager Supervisor at WSDOT told SDOT then.

This trail is literally on top of a state highway, and this connection would be just a block away from the I-90 bike tunnel (built as part of the freeway tunnel) that leads to the trail on the I-90 Bridge. How is this not a “highway purpose” that “benefit[s] the state?”

Really, WSDOT should be the one paying to build this trail connection since it’s their facility. The mere existence of the cow path here (the photos above are from 2016, so before the city’s neighborhood greenway was constructed) demonstrates that the state’s original lid design was incomplete and has always needed this path. But if they won’t fix their own deficient transportation infrastructure, the least they can do is allow SDOT to fix it for them without charging a big annual fee for the rest of eternity. Unlike with the state’s endless roads budget, Seattle’s bike budget does not have money to dedicate in perpetuity like this.

I guess we need someone high up to step in and end this absurdity. But beyond this one trail connection, this project highlights a larger problem with WSDOT. The department remains hostile at worst and indifferent at best to the communities their facilities travel through. Whether it’s people trying to walk across a fast and terrifying freeway on-ramp or people trying to get from their homes to a regional trail, WSDOT is consistently an impediment to street safety and non-motorized mobility. This needs to change.

In 1966, the State Highway Department showed off these plans for the area in the Seattle Times. I marked the approximate location of the missing trail segment on the map.

Not so long ago, the people living near this missing pathway organized themselves and revolted against the state highway department’s plan to cut a deep trench through the hillside and the neighborhood, displacing many households and essentially wiping Judkins Park off the map. This neighborhood displacement was seen by many highway planners as a good thing, since many Black people lived in Judkins Park and freeways were a common tool for so-called “urban renewal” efforts that displaced Black communities across the nation. The fight, led in part by the local chapter of the Black Panthers and a young Larry Gossett, won major changes to the state’s plan including the freeway lid and the trail that runs across it. It was a tough and generally unsatisfactory compromise, but it was the best that people could get and far better than the state’s preferred plan. A lot of homes and businesses were still destroyed in the old Atlantic neighborhood and the International District when the state built I-90.

So the lid and the trail are very much a part of the state’s highway, and it is revisionist history for WSDOT to claim otherwise. The lid exists as a lasting monument to a time when the state wrongly went to political war with a neighborhood rather than working with residents to improve their community. And it seems WSDOT still has not learned the lesson of that time. They should be looking for ways to improve life for people who live near their infrastructure rather than finding excuses to block such improvements.

The typical person has no idea and does not care which government agency owns the land where they are trying to walk or bike, they just want the route to be safe and connected. It shouldn’t matter which agency owns the land because they all exist to serve the public. Seattle residents are also Washington residents. It’s absurd and embarrassing that in half a decade they cannot find a way to build a few hundred feet of pathway so that people on the city’s new bike route can reach the state’s trail.