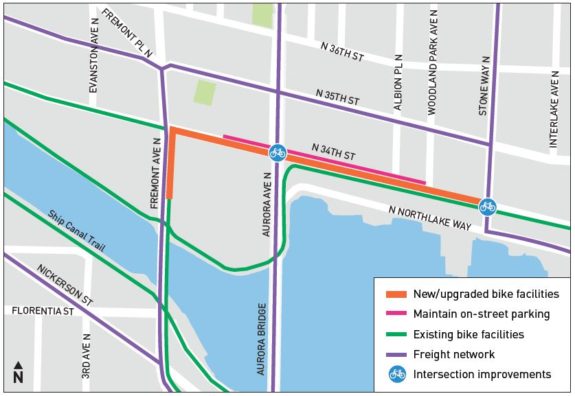 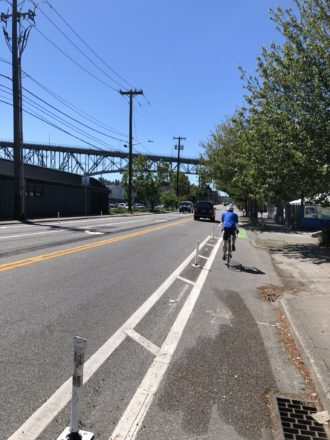 The latest upgrade to the bike connections around the Fremont Bridge make some very significant improvements, though larger solutions are still needed to make it truly comfortable for people of all ages and abilities.

The biggest changes are new protected bike lanes for most of N 34th Street between Fremont Ave and Stone Way, an extended bike lane for people biking north across the bridge, and a much larger sidewalk extension for trail users at Stone Way. These are all significant improvements.

N 34th Street already had painted bike lanes, but they were fairly skinny. Worst of all, the westbound lane was located in the door zone of parked cars and was often blocked by people making deliveries or dropping off passengers. The redesigned bike lanes make these few blocks much more comfortable. 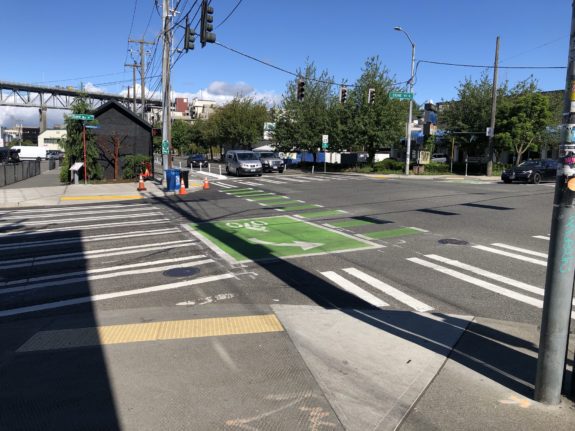 Large numbers of people transfer from the Burke-Gilman Trail to N 34th Street and Stone Way, making that intersection one of the most important and complicated intersections in the city’s bike network. Trail users often stack up on both sides of the intersection waiting f0r the walk signal. So SDOT significantly extended the sidewalk and curb near Solsticio Café, providing more protected space for people to wait and to navigate around each other. 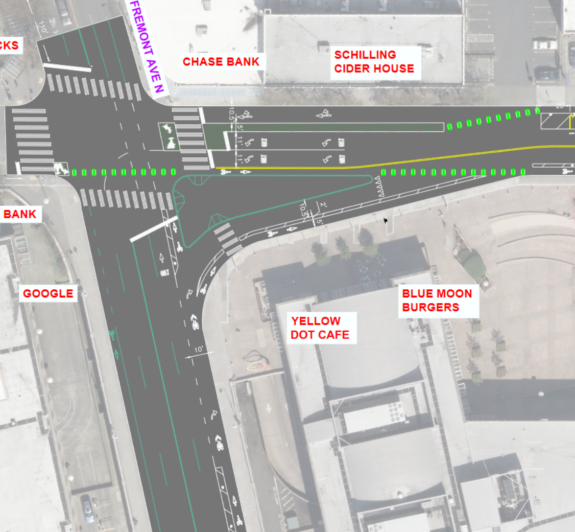 The city also extended the plastic posts and bike lane for people biking north across the Fremont Bridge. So people biking can spend much less time wondering if the person driving behind them is going to be patient or try to pass them before reaching 34th.

However, here is where we get into the unfortunate shortcomings of this project. It is a bit baffling to have the bike lane disappear for maybe an eighth of a block only to reappear at the curving turn onto N 34th Street. It feels like they could have connected this bike lane just by having people driving make a sharper right turn rather than merging into the bike space. It’s such an odd gap to get this close to having a fully separated bike route from downtown Seattle all the way to Fremont just to break it for a few feet here. Whatever traffic flow gains come from this (if there are any) do not justify breaking such a long, continuous bike route.

And the changes only help people heading north. There are no improvements for people heading south across the bridge. People turning left from 34th to the bridge still have to merge across the right turn lane and still have to figure out how to get to whichever skinny Fremont Bridge sidewalk they want to use. It’s still awkward and confusing for new users to get from the west sidewalk to the Westlake bike path. 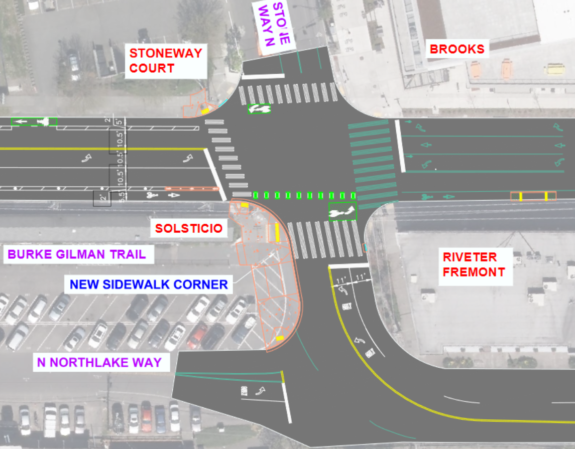 Perhaps an all-way walk and bike scramble phase could help. The pitiful little green left turn boxes are just not going to meet the demand for all the people making all kinds of turning movements here. In addition to moving with the green light, people should also have the chance to cross from where they are to where they’re going all in one motion. Does this mean there will be a period of time where cars can’t move? Yes. And that’s fine. 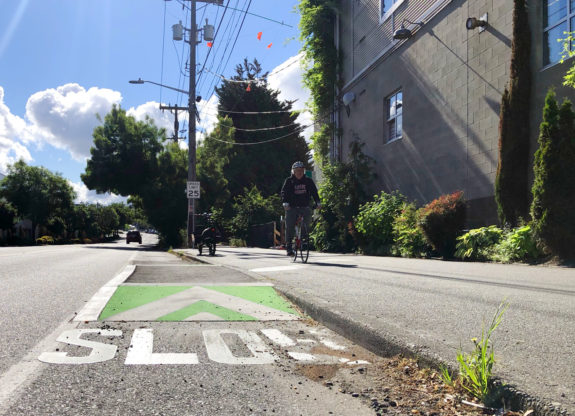 Oh, and there is now a little ramp thingy to people heading east don’t have to try to get onto the trail at the intersection. It’s kind of weird, but also handy.

So these improvements are good, but the job is not finished. The Fremont Bridge and the wide, fast streets through the Center of the Universe need a dramatic remake far beyond the scope of this project. And the bridge needs to be able to carry two-way bike travel on the east side to connect to the Westlake Bikeway, which means utilizing space on the main deck rather than the skinny sidewalks.

It’s bit depressing that it took so much time and work to make these improvements, which feel mostly simple and full of compromises. They are welcome improvements, but they don’t actually complete the connection. This feels like the kind of thing the city should be doing as just regular everyday work, not the result of four years of planning and design. Maybe all the compromises are the result of too many cooks in the kitchen and too many attempts to please everyone. We have much more difficult work than this ahead of us.