Final stretch of E Lake Sammamish Trail under construction, signalling the end of 4 decades of fighting 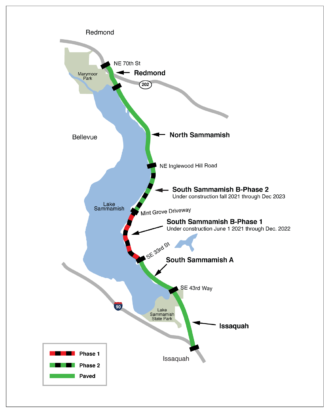 “If the trail is built, say the neighbors, it would violate their property rights and privacy, and would be challenged in court,” wrote the Seattle Daily Times in 1982 in a story about King County’s plan to convert the defunct rail line along the east side of Lake Sammamish into a walking and biking trail.

The rail line in question is part of the same historic line that had become the Burke-Gilman Trail just a few years prior, which was a huge and immediate success. King County was looking to repeat that success further down the line.

But that threat of legal challenge was very much real, and the owners of the extremely valuable lakefront property had more than enough money to fund as many legal battles as possible to delay or stop the trail. And they did, even taking the case to the doors of the U.S. Supreme Court in 2019. The highest court in the nation declined to hear their appeal, finally ending nearly four decades of legal threats and actions.

Paving the East Lake Sammamish Trail was first put to King County voters as part of a 1982 parks bond measure. Of course, it may not have taken this long had voters actually approved that bond measure, which failed alongside every tax measure on the ballot. It’s hard to imagine a parks measure failing these days, but the early 80s were not a good time for tax measures.

But the East Lake Sammamish Trail fight became about a lot more than just a couple miles of trail between Redmond and Issaquah. It became about protecting the public’s right to our own land. This rail line was initially constructed by a group of Seattle investors as a somewhat desperate move to all but force Northern Pacific to choose Seattle as the northwest terminus for their cross-country railway. The railway was more interested in Tacoma, so Seattle business boosters (led largely by Thomas Burke and Daniel Gilman) decided to quickly built a rail connection from downtown Seattle to Snoqualmie Pass on their own. And they did. Industry and communities grew around the rail line, and by the time Northern Pacific got to the Pacific Northwest, buying out the Seattle, Lake Shore and Eastern Railway was the obvious best choice for completing their route to the sea. This rail line dramatically altered the fate for economic and population development in the region.

The railway’s right-of-way along East Lake Sammamish belongs to the public, and the trail should have opened many years ago. Many landowners even constructed landscaping or docks on our public land, and so they obviously did not want to have to take all that down. But it was not theirs to build on. The group that fought the trail used every legal avenue available in our nation to try to steal this land from us and keep it for themselves. They even tried to take down cornerstone laws that enable rails-to-trails across the nation. But they lost.

The final segment of the trail, 1.75 miles from SE 33rd Street to the Mint Grove Driveway, will be closed for construction through December 2022. But ground is broken, and there’s no going back now. It took a ton of advocacy by groups like Cascade Bicycle Club and the Friends of the East Lake Sammamish Trail, and King County Parks had to stay committed to the project for a very long time. It’s finally happening. It took 40 years, but it’s happening.

9 Responses to Final stretch of E Lake Sammamish Trail under construction, signalling the end of 4 decades of fighting