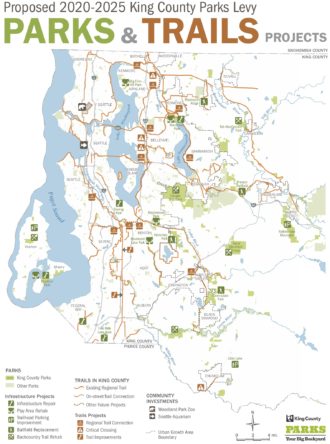 About 80 percent of the King County Parks budget comes from a levy that goes to voters every six years, and King County Executive Dow Constantine is proposing an even bigger levy to send to voters this autumn for 2020–25.

The $738 million proposal would cost the average property owner about $7 per month, $2 more than they pay under the expiring levy according to a press release from King County.

Among many investments in Parks facilities and programming across the county, the next levy would complete regional trail connections that have been in the works for a long time. It would also close funding for some of the most difficult and iconic segments of the Eastside Trail like the Wilburton Trestle. Here are some highlights from the press release:

Renton in particular stands to see some major bike improvements from the Lake to Sound and Eastside Trails. After these projects are complete, Renton will have quality access west to the Green River and Interurban South Trails as well as north via the Eastside Trail connecting to the Mountains to Sound, and 520 Trails.

The levy map also shows a connection from the current north terminus of the Cross Kirkland Corridor (Eastside Trail) at Totem Lake to the Burke-Gilman and Sammamish River Trails. The Lake to Sound Trail will make connections in SeaTac, Tukwila and Des Moines. And the Green River Trail should finally connect to the Duwamish Trail in South Park.