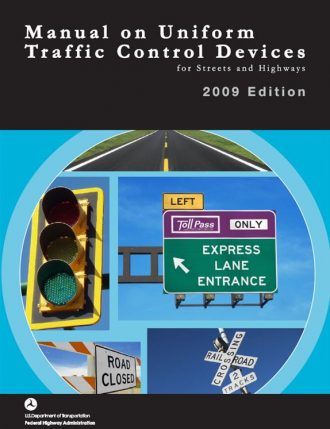 This very boring-looking book has had a huge impact on the way our communities look and function (or not).

There is a book that gives traffic engineers across the nation guidelines for how to design streets and highways, and the Federal Highway Administration is updating it right now. Unfortunately, the current draft of the Manual on Uniform Traffic Control Devices (“MUTCD”) is backwards, limiting safety innovations while defending the same dangerous road designs that contribute to the deaths of tens of thousands of people every year.

Preliminary counts show that about 42,000 people died in U.S. traffic collisions in 2020, the highest count since 2006 and a figure on par with the 1980s. We will not see the amount of carnage change until we change the designs of the roadways to encourage safer travel for every person. The status quo is not working, and our faulty national road-building standards are largely to blame.

You have until tomorrow evening (9 p.m. 5/14) to submit a comment on the updated guide. The League of American Bicyclists has a handy online tool you can use.

The MUTCD does not make the laws exactly, but it does constrain the design decisions traffic engineers feel comfortable making. The guide encourages car-prioritized streets with many lanes, high speeds, wide turns and long crosswalks, conditions we know are dangerous and lead to deaths and injuries. But if someone dies in a crash on a new roadway, it’s very difficult to win a lawsuit against the agency responsible if the design follows the national standards outlined in the guide. The guide gives agencies and engineers cover to repeat the same dangerous design mistakes over and over and over again in communities all across the nation.

At the same time, the guide also makes it more difficult to innovate potentially safer designs that are not included within its pages. Agencies have to be very careful when innovating, and they must invest a lot of time and money into studying ideas that don’t conform to the guide. This is why SDOT sometimes tries out a new type of bike crossing or signal once, then waits years before repeating it elsewhere. They are working through a slow study process that only some agencies with the necessary staff time and funding can work through. The result is a study that SDOT and other agencies can reference to try out the same non-standard design. SDOT has a long history of serving this role, which is one of the department’s great gifts to other transportation agencies in the nation.

The past decade or two has seen an enormous number of innovative street design trials, so we have lots of data about protected bike lanes, safer intersections, better crosswalks, and traffic calming of all kinds. We also have a lot of data about how to make streets safer, including dangerous streets that still conform to MUTCD standards. This data needs to be reflected in this guide so agencies across the nation can more easily build or redesign the streets that better protects the lives and health of the people in their communities. In other words, safe streets should be our national standard.

The League of American Bicyclists put out an action alert for people to support their five major goals with an MUTCD rewrite:

This entry was posted in news and tagged league of american bicyclists, mutcd. Bookmark the permalink.