SDOT is moving forward with its plan to implement up to 20 miles of “permanent” Stay Healthy Streets this year, even as the department doesn’t yet have a funding source identified to keep the Mayor’s promise from last summer. A plan to use money from some projects in the bicycle master plan program met resistance from the city’s advisory boards.

It also looks like the department is still considering which Stay Healthy Streets will be selected to become permanent as well. SDOT has another survey up through March 11 that gets fairly granular on what segments of their nearest Stay Healthy Street people walking, biking, and rolling feel safe using.

We also still don’t know very much about what is actually planned to make Stay Healthy Streets permanent.Of course, what ends up happening will in part be driven by the budget. One slide did show a new kind of paint-and-post curb extension along with some of the other ideas that have been suggested as concepts so far: 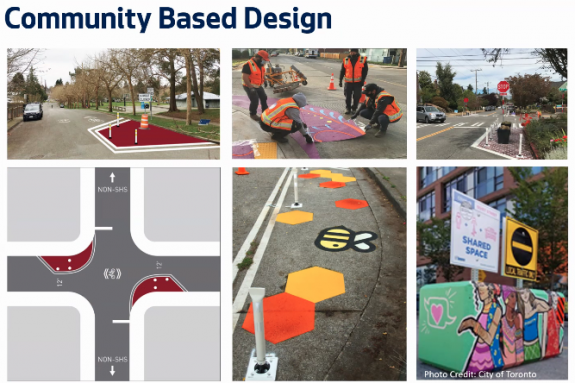 Later this month we should have more details SDOT’s full Stay Healthy Streets proposal, at least on some of the more hotly contested ones like Beach Drive SW in West Seattle. Fill out the survey!

Ryan Packer is Temporary Editor of Seattle Bike Blog.
View all posts by Ryan Packer →
This entry was posted in news and tagged greenwood, stay healthy streets. Bookmark the permalink.