Last night the oversight committee for the Move Seattle levy was told that the popular Stay Healthy Streets program will likely have to pause if the Seattle Department of Transportation doesn’t get approval to divert funding from 2.5 miles of neighborhood greenway projects that the department says it’s unlikely to be able to fully complete in the foreseeable future.

SDOT’s Director of Project Development, Jim Curtin, told the committee that the funding source that the department had originally used to stand up and maintain Stay Healthy Streets in 2020, Federal CARES Act funding, has now run out, and that any additional funds used to support the program will be coming from Bicycle Master Plan funding.

The oversight committee did not reach a consensus on whether to approve the funding swap, asking to come back to another meeting to discuss it further. Curtin told the board that if they didn’t find a source for funding, they would have to pause planning future improvements and have to look at whether the department could continue to maintain existing Stay Healthy Streets at all. 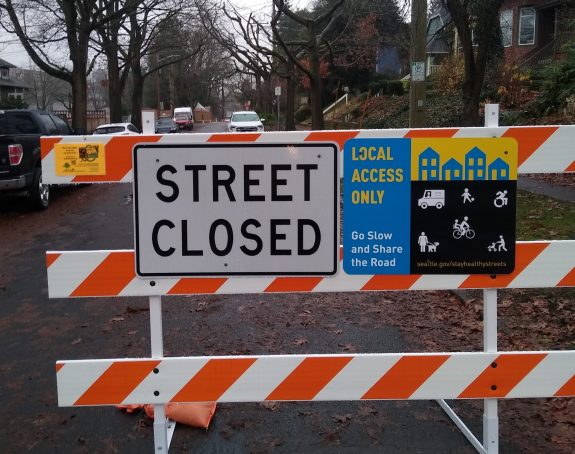 A current barrier on a Stay Healthy Street.

During the meeting, SDOT Director Sam Zimbabwe detailed the history of the program, underlining the fact that last Summer when the Mayor’s office and SDOT announced the Stay Healthy Street program would evolve into permanent infrastructure they did not have a funding source identified.

The modal boards are interested in seeing more details of what permanent Stay Healthy Streets will actually entail- most of what was shown at the January meeting to the bike and pedestrian boards were more vision than specifics. Bicycle Advisory Board chair Patrick Taylor suggested that SBAB might be more likely to sign onto SDOT’s proposal if they could see more details on proposed Stay Healthy Street design.

In January, SDOT presented to the Greenwood Community Council on converting the 1st Ave NW Stay Heathy Street and showed some images of possible intersection treatments that utilized Ecoblocks (like the ones currently barricaded in front of the east and west police precincts) or Tuffcurbs to create more of an intersection block than a simple sign. This is one of the first opportunities we’ve had to see proposed design elements SDOT is developing for Stay Healthy Streets. 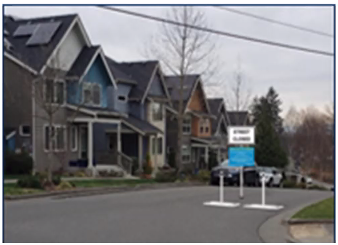 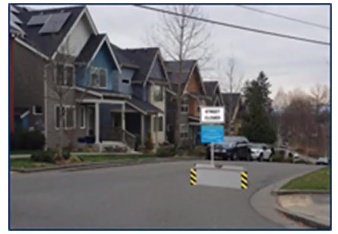 SDOT is moving forward with plans for Stay Healthy Streets in neighborhoods like Georgetown and South Park as it engages in a bit of a stalemate with these advisory boards. It doesn’t look like they will be proposing any alternate funding sources, suggesting that the Bicycle Master Plan will ultimately be the source of Stay Healthy Streets funding if the other choice is the shuttering of the program entirely.