Update (3/1): SDOT has confirmed speed limit changes on Aurora and other corridors is expected in 2021 pending approval from WSDOT. The post has been updated below with comment from the department.

Late last year, the Seattle Department of Transportation proposed a plan to reduce speeds on most of the highways within the city of Seattle that fall under the jurisdiction of the state of Washington. The proposal, obtained by Seattle Bike Blog via a records request, if fully implemented, would ultimately leave very few remaining stretches of highway through the city with a speed limit above 30 mile per hour.

This move follows an announcement in fall of 2019 that the City of Seattle would be moving to adjust speed limits on most arterial streets to 25 mph. As of January, the department said that nearly 75% of arterials are currently posted as 25 mph. But WSDOT corridors like Aurora Ave and former WSDOT corridors like Rainier Ave see a huge share of Seattle’s serious traffic injuries and fatalities. SDOT’s proposal to WSDOT notes there were 53 serious injuries or fatalities on Aurora Avenue resulting from collisions between 2015 and 2019 and 595 injuries that weren’t determined to be severe in the same timeframe. Aurora Ave remains a public health crisis.

The first phase of speed limit reductions would implement a 30 mph speed limit on Aurora Ave N north of Green Lake. Currently that stretch has segments where the limit is 40 mph and segments where it’s 35. The speed limit along 145th St would be lowered to match this speed, as well as the northern segment of Lake City Way. Between 115th and 130th on Lake City Way, in the heart of Lake City, the limit would drop to 25mph matching Seattle’s other arterials. Sand Point Way south of NE 65th St would drop from 35 to 30 mph; north of there SDOT has already implemented a 25 mph limit. 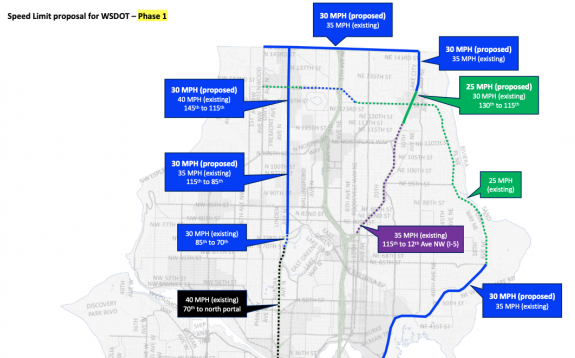 SDOT’s proposal for the first phase of lowering speed limits on WSDOT corridors on the north end of Seattle. (Click to enlarge)

South of downtown, East Marginal Way between Spokane Street and the 1st Ave S bridge would go from 35 to 30 mph and a very short segment of Highland Park Way/SR-99 over 1st Ave S would drop from 35 mph to 25 mph. 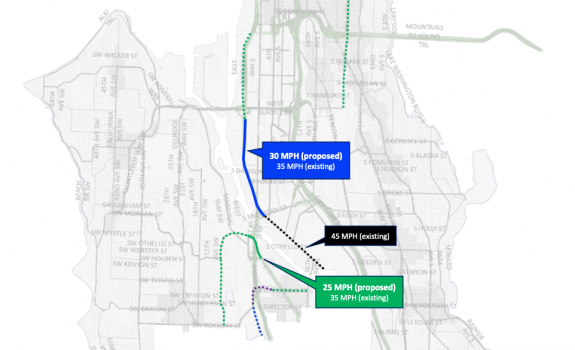 SDOT’s proposal for the first phase of lowering speed limits on WSDOT corridors on the south end of Seattle. (Click to enlarge)

The second phase would lower speeds on the remaining stretch of Aurora south of Green Lake from 40 mph to 35 mph. This is the stretch of Aurora that SDOT’s data shows the most people currently drive at speeds significantly above the limit. The remainder of Lake City Way south of 115th would drop from 35 to 30 mph, and Montlake Boulevard around the ship canal would drop from 30 to 25 mph. 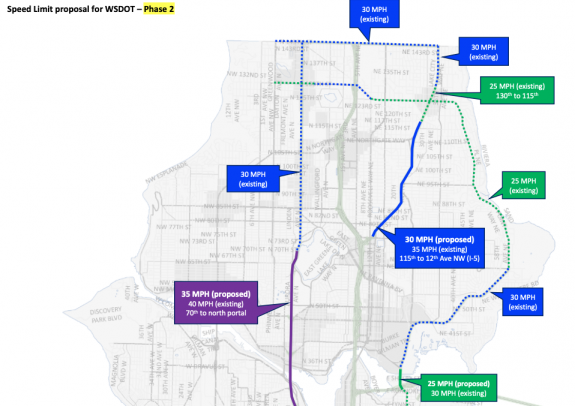 SDOT’s proposal for the second phase of lowering speed limits on WSDOT corridors on the north end of Seattle. (Click to enlarge)

The remaining change south of downtown in phase 2 would be a reduction on East Marginal Way south of the 1st Ave S bridge in Georgetown from 45 to 35 mph. This is the segment where SDOT is currently planning to add a grade-separated segment of the Georgetown to South Park trail. A stretch of 1st Ave S over SR-509 in South Park without any sidewalks would drop to 30 mph. 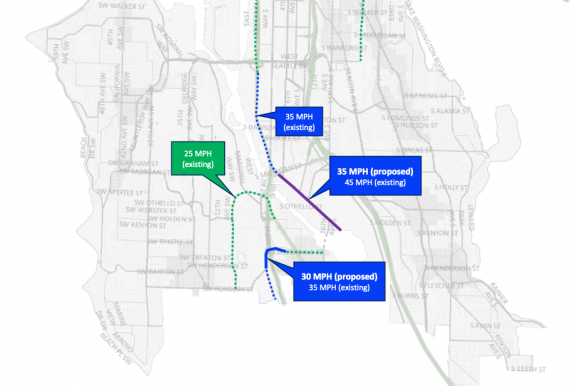 SDOT’s proposal for the second phase of lowering speed limits on WSDOT corridors on the south end of Seattle. (Click to enlarge)

The chart below lays out the different limits proposed for each phase alongside the existing speed limit: 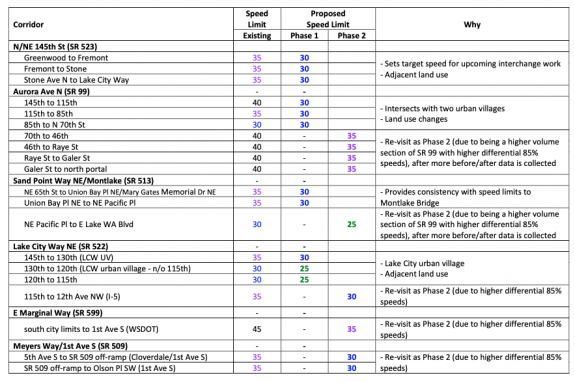 Speed limit changes alone aren’t enough to achieve all of our desired safety outcomes, but SDOT notes that “We’re seeing that speed limit signs alone can improve public safety, even without changes in enforcement or urban design. This finding is important because enforcement disproportionately impacts Black people and other people of color”. Increased police enforcement of speed limits doesn’t appear to be on the table here, rightfully.

The proposal includes data collected on vehicle speeds on these WSDOT corridors, including the difference between posted speed and the median speed (50th percentile), the speed at which half the drivers are driving below. Below are the WSDOT corridors with the biggest difference; most of the segments at the top of the list are proposed to see lower posted speeds in phase 2 as SDOT collects more “before/after” data. This list shows segments where the street design may be playing a larger role in current vehicle speeds than posted speed limit signs. 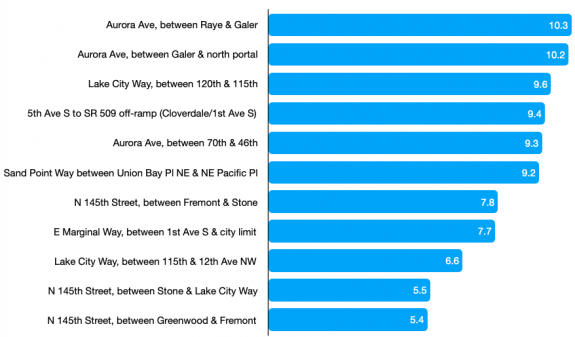 Difference between median speed and posted speed limit, in miles per hour, WSDOT corridors in Seattle.

The proposal does list a few engineering strategies that SDOT is moving ahead with to pair with reduced speed limits, including traffic signal timing changes to reflect the new speed limits, as well as incorporating the new speed limits into any new project designs: design speeds can influence how lane lines are painted. But the primary one listed was increased signage: SDOT’s policy would add signs at every arterial crossing as well as every 1/4 mile: if a driver is going 25 mph they would encounter a speed limit sign every 36 seconds. 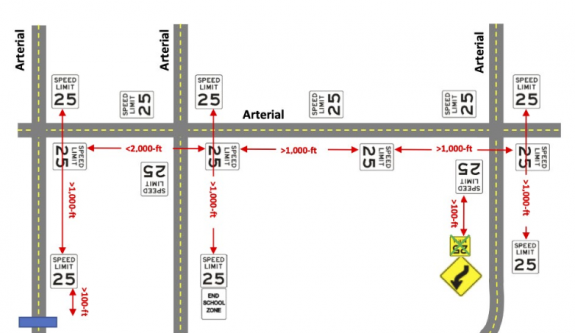 SDOT did not provide answers to questions from Seattle Bike Blog about any known current implementation schedule for this proposal or details about how the proposal was received at the Washington State Department of Transportation; we hope to update the post with more information as we get it. Update: SDOT’s Ethan Bergerson tells us that “we are planning for an initial reduction in speed limits on Aurora and other state routes in 2021. We must wait for the official approval from WSDOT, which is expected in the coming months. We will continue our partnership working towards lower speed limits into the future”.

Bergerson also told us, “Setting corridor speed limits is an important part of our larger Vision Zero strategy. Posting lower speed limits and more frequent signage follows NACTO best practices and has led to lower speeds and fewer crashes in other Seattle neighborhoods. These speed limit reductions open the door for further design changes described above and will be accompanied by signal timing changes and speed limits reductions occurring throughout Seattle.  We expect this comprehensive approach to safety will influence driver behavior and lead to safer speeds.”

Initial data on Seattle’s first set of speed limit reductions, recorded before the pandemic caused traffic volumes to plummet, showed an overall reduction in crashes of 22%. These case studies were all on arterials in North Seattle, and none of them were high-crash corridors, but so far the data is promising. Implementing lower speed limits on the WSDOT-controlled corridors through the city will be key, though, and now we know just how far along the city is in proposing those changes.

Ryan Packer is Temporary Editor of Seattle Bike Blog.
View all posts by Ryan Packer →
This entry was posted in news and tagged sdot, speed limits, wsdot. Bookmark the permalink.