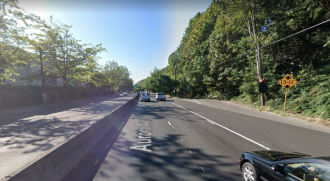 Last night, 5 days after SDOT announced that it had installed two speed-display signs on either side of the Aurora bridge, a pedestrian was hit and killed on the Queen Anne side of Aurora Avenue N by someone driving. The Seattle Times reports that as of last night SPD did not have any information to provide about the events that proceeded the crash. We know the crash happened on the west side of Aurora Ave in the 2400 block and that the victim has been described as a 41-year old man whose identity is not yet known. The driver reportedly left the scene.

This marks the 10th traffic fatality on Seattle’s portion of Aurora Ave N since last January. Nine of those ten fatalities were people walking on Aurora. Many more people have been seriously injured on the street in that timeframe. Aurora Ave and Rainier Ave frequently change places as the top street for traffic fatalities in the city of Seattle.

Aurora Ave just got a #VisionZero upgrade with new speed radar signs. Thanks to @Reuvencarlyle for supporting our work to end traffic deaths and serious injuries on city streets by 2030! https://t.co/uDiM37ubKf

Last year, when the city announced that it was lowering the speed limit on the vast majority of arterial streets to 25 mph, it noted that state routes like Aurora would not be included in that but that also said that “the City will also partner with the Washington State Department of Transportation (WSDOT) to reduce speeds on state highways within city limits, including Aurora Ave N on State Route 99 and Lake City Way on State Route 522”. The speed limit remains 40 mph on Aurora Ave all the way from the SR-99 tunnel to Green Lake, the longest stretch in the city with a speed limit that high.

WSDOT recently spent $19 million repaving the entirety of Aurora Ave from Roy Street to the city line, and despite both agencies having a shared goal of reducing fatalities and serious injuries to zero by 2030, minimal safety improvements were completed with that repaving. According to state law, SDOT is responsible for the traffic operations on the street, though the state would need to approve a change to the speed limit. Why hasn’t it happened yet?

We recently reported that the state 2021-2023 transportation budget will likely include money to complete a $2 million planning study for Aurora, which would not include any money for actual roadway changes. The state has already completed many studies encompassing portions of this dangerous route, what is needed now is action.

Ryan Packer is Temporary Editor of Seattle Bike Blog.
View all posts by Ryan Packer →
This entry was posted in news and tagged aurora, pedestrians, vision zero. Bookmark the permalink.