UPDATE (2/5): The speed bumps will be removed. This morning we received an update from SDOT’s Ethan Bergerson:

I want to give you an update that we are planning to remove this speed bump. Our City Traffic Engineer Dongho Chang personally inspected the location yesterday afternoon and, while the speed bump complied with official design standards, he felt that it was still best to remove it given the concerns we were hearing from riders because we want people to feel comfortable riding on our protected bike lanes. We’re considering other possible safety measures for this location, in addition to the safety features and signage that we have already installed.

Original post: Without any advance warning, the Seattle Department of Transportation has added “speed bumps” to the Roosevelt Way NE protected bike lane around the bus stop island near N 43rd Street. The two bumps are plastic with reflective tape on them, and come up fast on people biking. Per Dongho Chang, City Traffic Engineer, the bumps were installed in reaction to at least one bad collision between someone biking at fast speed and someone using the drop-off space here for UW Medicine. 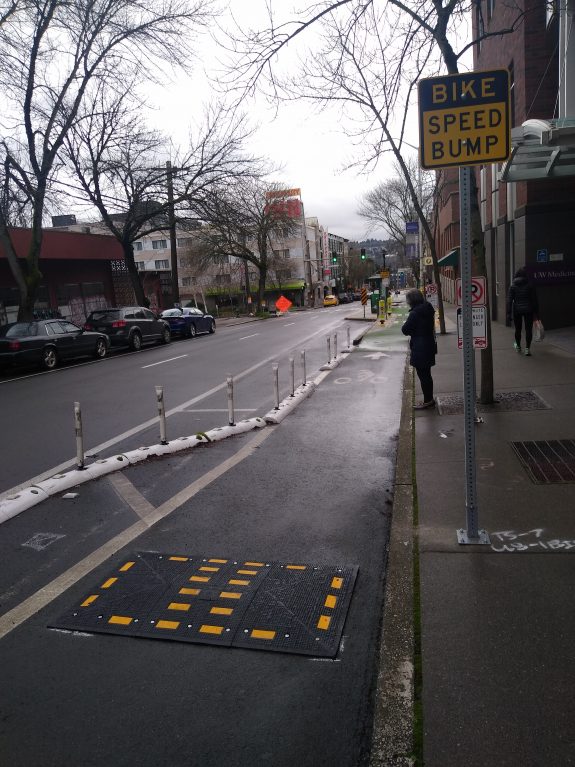 The bike speed hump was installed in the past few days

We went out to inspect the bike speed hump after a reader tip came in overnight by reader Bob Vosper who didn’t see the bumps last night until the last second and ended up flipping over his bike. Thankfully, Bob’s okay. He sent us a photo of how the bumps look at night. 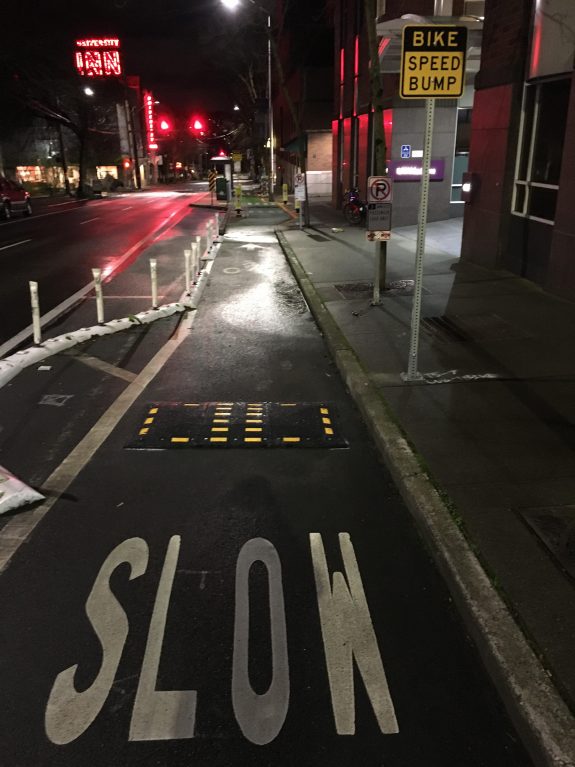 There’s an advance warning sign a bit before the sign right next to the bump, but that advance sign is a lot higher off the ground. Dongho Chang told me that’s due to MUCTD (Manual on Uniform Traffic Control Devices) standards for sign height. But it may end up out of the field of vision for someone biking down Roosevelt at night with a bike light aimed lower. 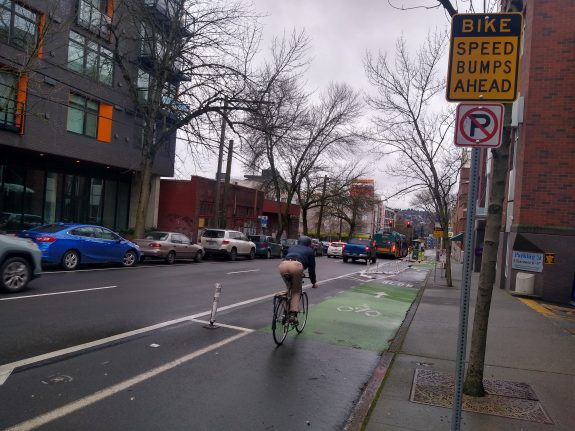 Chang was out inspecting the speed bumps today while we were checking it out, and told us they plan to replace the plastic dome with an asphalt hump like the ones more common around town. He also thought there were some immediate tweaks they could make to the approach to give people biking more warning that they’re coming up on a hazard.

“We can say that this was one of several tactics intended to improve safety near the bus stop, loading zone, and main entrance to UW Medical Center a few feet down the road. People, including many hospital patients, need to cross over the bike lane in order to reach the bus stop and loading zone. In addition to being busy King County Metro bus stop, this is also the loading zone for several forms medical transportation such as King County Metro Access, DART, Hopelink Medicaid Transportation, and UW Medicine hospital shuttles.”

Bike/pedestrian collisions are a lot more rare than vehicle/pedestrian collisions, but if there was a hotspot in Seattle for crashes like this, it would be here. SDOT’s collision database shows at least 3 recorded collisions here since 2018. However, the design here looks like it makes the protected bike lane more dangerous for people biking. It seems like the best fix here would be to remove this plastic bump, which isn’t like anything currently in a PBL in the city, until another fix can be put in place.

Ryan Packer is Temporary Editor of Seattle Bike Blog.
View all posts by Ryan Packer →
This entry was posted in news and tagged roosevelt, speed bumps. Bookmark the permalink.