With automatic enforcement on the Spokane Street bridge active, no sign of crosswalk cameras

As of this past Monday morning, SDOT has turned on the automatic cameras that are able to ticket drivers $75 who aren’t authorized to use the Spokane Street drawbridge between 5 am and 9pm. This is great news for transit riders who cross the bridge and other essential workers allowed to use it. That day also marked seven months since the law the state legislature authorized allowing automatic enforcement of restricted lanes went into effect, and over nine months since it was signed by the Governor.

The pilot program also allows Seattle to issue automatic tickets to drivers who block an intersection or a crosswalk at up to twenty locations “where the Seattle Department of Transportation would most like to address safety concerns”, per the ordinance that the city council passed last year. But the city can only pilot those cameras until June 30 2023, meaning less than 30 months remain in the pilot, and we still don’t know what that list of camera locations is going to be. 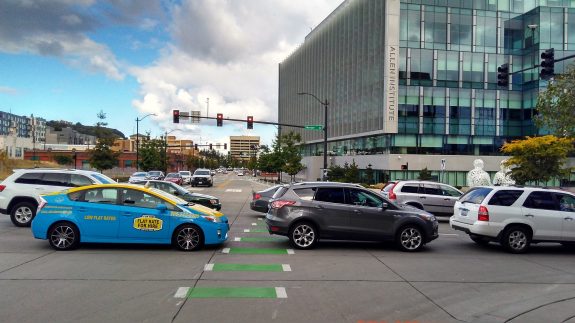 Mercer and 9th Ave N is a busy bike corridor that is frequently impacted by drivers blocking the box.

SDOT spokesperson Ethan Bergerson told me that the agency hasn’t determined a list of camera locations yet, nor was he able to provide an estimate of when any crosswalk enforcing camera locations might be announced.

When the law authorizing a pilot program was before the legislature, a large portion of the contingent that showed up to support it was pushing for that crosswalk enforcement element, to improve safety for everyone and improve mobility for people with disabilities for whom blocked crosswalks often mean harrowing detours. Without those voices working together with transit advocates pushing for the tools to enforce bus-only lanes, it’s likely there would be no pilot program at all.

The legislature had been considering an automatic camera bill with a crosswalk component since January of 2019, with a transit lane bill also before the legislature in the 2018 session and discussed by legislators well before that. It is surprising that a list of locations was not ready to go.

The pilot program requires a report to be delivered to the legislature by June 30 of next year. Assuming a few months of process and outreach for a brand new type of enforcement camera, it’s possible that the initial report may barely include a year of data on crosswalk enforcement. The renewal of this program, or its being made permanent, would be one necessary step in reducing the role of in-person traffic enforcement. Without making this change permanent, Seattle can only enforce red lights, railroad crossings, and speeding outside schools during specific times with automated cameras. But first, the pilot program needs to be successful. For that to happen, it needs to begin.

Ryan Packer is Temporary Editor of Seattle Bike Blog.
View all posts by Ryan Packer →
This entry was posted in news and tagged blocking the box, sdot. Bookmark the permalink.

1 Response to With automatic enforcement on the Spokane Street bridge active, no sign of crosswalk cameras