Someone driving struck and killed a 63-year-old man on a bike at the east end of the Spokane Street Bridge to West Seattle Friday evening. The suspect then fled the scene in a white or silver sedan.

Our deepest condolences to this man’s friends and family.

Seattle Times reporter and West Seattle resident Mike Lindblom was at the horrible scene shortly after it happened and posted a photo (Caution: It is not graphic, but may still be troubling to view). The person on the bike ended up just east of the crosswalk to the east of 11th Ave SW, a commonly-used route for people biking from the Spokane Street Bridge bike path to the bike path that connects to E Marginal Way. SPD has since confirmed that the suspect was driving eastbound.

Though the exact circumstances of the collision are not yet clear, the crosswalk serves as the shorter option for people on bikes crossing the Duwamish River. There is also a winding trail that loops around and under the Spokane Street Bridge, avoiding the street crossing but also taking extra time. Both options are popular along this heavily-used bike route. 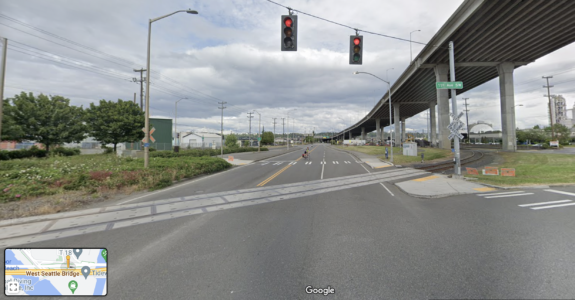 Google Street View happens to show someone on a bike using the crosswalk.

“Tragic news,” wrote Seattle Neighborhood Greenways on Twitter. “Our hearts break for this person and their loved ones. This is the key bike route connecting West Seattle to the rest of the city, and must be safe for everyone.”

“Sincere condolences to friends and family of the person killed biking on the West Seattle bridge trail this evening,” Cascade Bicycle Club wrote. “As people who bike, we’re in this together. This is a gut punch to anyone who bikes in the city.”

Detectives are investigating after the driver in a hit and run collision struck and killed a man riding a compact electric bicycle Friday evening near the Spokane Street Bridge.

SFD medics attempted life-saving measures on the bicyclist, but the 63-year-old-man was declared deceased at the scene.

Detectives with SPD’s Traffic Collision Investigation Squad responded to process the scene and begin their investigation. They are asking anyone with information about this collision to call the Violent Crimes Tip Line at (206) 233-5000.