Today we are circling back to some news that we missed from last autumn. SDOT has announced they will be making big upgrades to the Queen Anne approach of the Thomas Street overpass connection to Myrtle Edwards Park and the Elliott Bay Trail this year. This improvement comes as part of the package of transportation changes planned with the opening of Climate Pledge Arena this fall.

After public comments supported the option allocating the most space for walking and biking here, SDOT will convert the entire western half of 3rd Ave W north of the overpass to an extension of the trail, with delineated space for two directions of bike travel created out of one half of the current street, turning the street into a one-way for vehicle traffic northbound. This is how the street basically operates now anyway, with most traffic going west on Harrison instead of south on 3rd to access Elliott Ave. 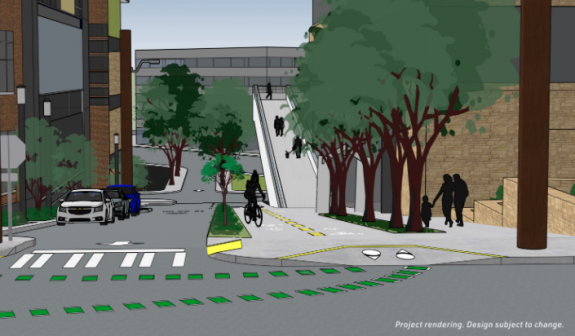 SDOT’s rendering of 3rd Ave W looking toward the overpass. 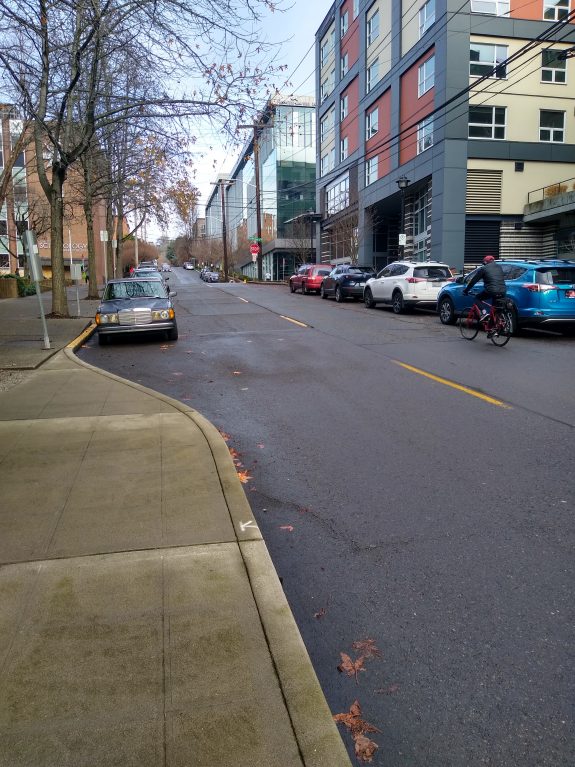 The southbound side of the street will be entirely converted to walking and biking space.

This will alleviate a big pinch point to a great connection- currently people biking over from the waterfront get to decide between biking on a sidewalk that’s not in great condition or taking the lane on 3rd Ave W, where drivers heading off of Elliott Ave frequently exceed the speed limit.

SDOT also announced they will be installing a protected bike lane on W Harrison Street which will connect to the planned two-way PBL on Queen Anne Avenue N, but only in the uphill eastbound direction. People biking westbound will be in a travel lane that SDOT will be adding speed cushions to. SDOT is also adding four new all-way stops in the area which should slow traffic as well. 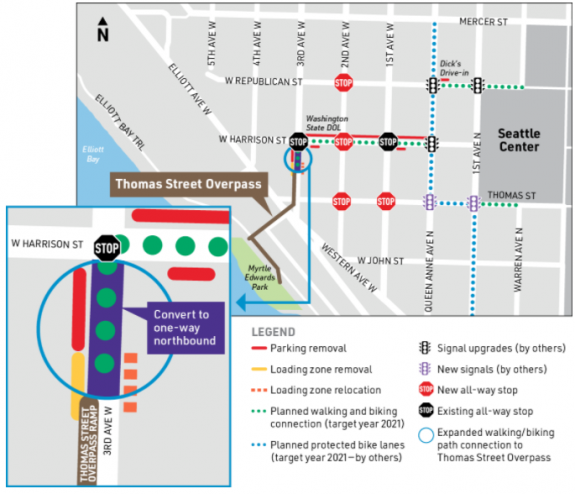 Map showing the planned connections between the Thomas Street overpass and the Seattle Center bike facilities.

SDOT had originally envisioned bike traffic using either Thomas or Republican Street to connect to the overpass, but Harrison makes much more sense given the street grades in the neighborhood.

The overpass connection is one spoke of the bike network improvements coming with the arena, the other main one being a connection with the 2nd Avenue protected bike lane via 1st Ave and Broad Street. Thomas Street on the other side of the Seattle Center was another improvement, but that has been put on hold. As for the disappointing news about the Denny Way terminus of the 2nd Ave PBL, we will be bringing you additional info about that soon.

And then there’s all of the infrastructure for private cars coming with the arena.

On the other side of Myrtle Edwards, any bike connection between the Elliott Bay Trail and the planned waterfront bike trail remains unfunded as the rest of the waterfront’s reconfiguration moves forward.

But the Thomas Street overpass spot improvements and the connecting one-way PBL are definitely something to look forward to this year.