Crews are gearing up to build a protected bike lane on 4th Ave between Pine and Madison Streets downtown.

This is the start of the second north-south bike corridor downtown and a key piece of the Basic Bike Network vision, which would build a connected web of protected bike lanes from Seattle Center to the International District and places in between, helping more people bike to more homes, workplaces and destinations within our state’s busiest area.

Though 4th and 2nd Avenues look close together on a map, the topography on the ground puts them in different realms. At Pine Street, the streets are basically at the same elevation. But the two blocks separating them at Madison are some of the steepest streets in the entire city. So for people trying to access major institutions, like the Seattle Public Library or City Hall, or heading further up to First Hill, 4th and/or 5th Avenues are vital.

The first segment will be a two-way bike lane on the west side of the street between Pine and Madison, essentially mirroring 2nd Ave.

There is currently an uphill painted bike lane on 4th Ave that ends at Spring, so this project will connect to that old bike lane for the time being. That should be a huge improvement for people heading northbound who currently have to either merge into the left general purpose lane and bike in mixed traffic or try to merge across the entire street in front of the library in order to ride in the bus lane. Neither option is good. Being able to simply continue straight into a protected bike lane should be a massive improvement.

There may be limited utility to the southbound bike lane until the project extends further in a future phase, but people biking to First Hill will have a new option for connecting to the Spring Street bike lane. Sure, the block between 4th and 5th is steep, but it is likely worth it to avoid the stress of biking on 5th Ave, something many people simply would never consider doing. And when the Central Branch Library opens again, the bike connection there will be great (OMG, remember going to libraries?!?!? You could just go and get comfortable and read whatever you want for free…).

The planned bike lane is skinny for a two-way lane at eight feet plus a 2.5-foot buffer. That’s the absolute minimum standard for such a facility, and a bit skinnier than most of the 2nd Ave bike lane. Like on 2nd, the bike lane and left turn lanes will have separate signal phases to avoid conflicts at intersections.

In future phases scheduled for construction in 2021, the bike lane will extend to Vine Street to the north and will connect south to 2nd Ave through an out-of-the-way detour down Yesler: 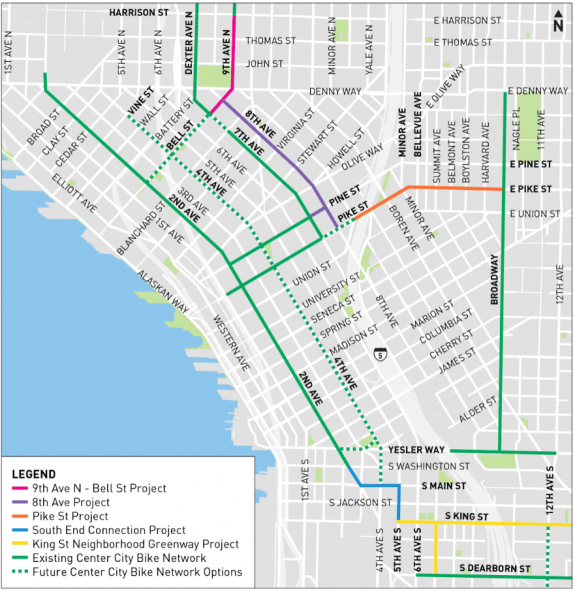 We will have another post dedicated to discussing the future south end connection soon, so stay tuned.

Founder and Editor of Seattle Bike Blog.
View all posts by Tom Fucoloro →
This entry was posted in news and tagged 4th ave, basic bike network, sdot. Bookmark the permalink.