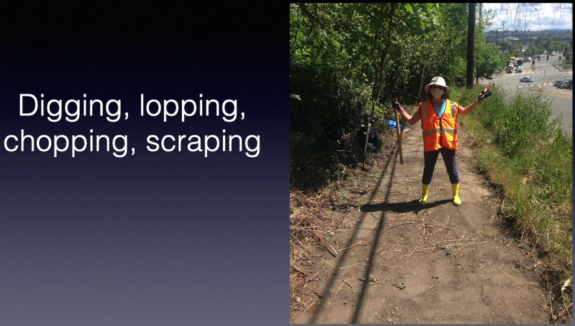 Screenshot from a West Seattle Bike Connections video about unearthing the path.

Safe streets archaeologists in West Seattle made an astounding discovery this month, unearthing a long-forgotten sidewalk and path connecting the Duwamish Trail to some greenbelt trails off Highland Park Way SW.

While waiting for city plans to help ease the negative impacts from increased traffic on Highland Park Way SW due to the West Seattle Bridge closure, neighbors Jodi and Craig started to suspect that the nearby greenbelt may have swallowed a sidewalk many years ago. So they headed out with a shovel and struck concrete (gray gold!) several inches down.

So folks from the Highland Park Action Committee, West Duwamish Greenbelt Trails and West Seattle Bike Connections worked together to excavate the old path, which is gravel in some places and concrete in others.

“While we’ve been waiting for SDOT and SDON to reveal a glimpse of their neighborhood traffic plans and engage us in discussions about biking and walking improvements for the neighborhoods most affected by the West Seattle Bridge closure,” Don Brubeck of West Seattle Bike Connections said in an email, “several people from Highland Park Action Committee, West Duwamish Greenbelt Trails Group and West Seattle Bike Connections have being doing DIY improvements on Highland Park Way. We uncovered a long-buried and forgotten sidewalk that links the West Duwamish Trail to the trails in the greenbelt that go up to South Seattle College and other trailheads.”

New sidewalks can cost millions of dollars per block, so these neighbors just unearthed a public good that is very valuable. How cool is that? Big thanks to everyone involved.

Of course, the forgotten sidewalk is woefully unfinished, lacking accessible ramps or a quality crossing at W Marginal Way. There is not even a connection to crosswalks at the intersection, which suggests that even the engineers who designed the intersection did not know the path was there (or they knew and didn’t care). 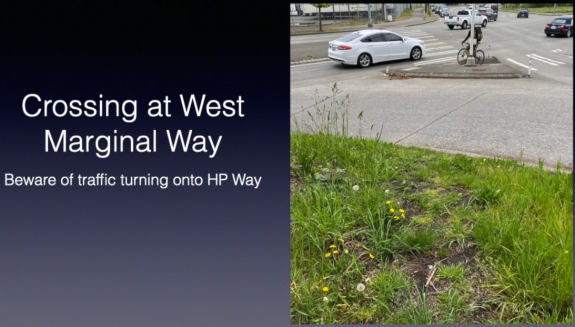 Screenshot from the video.

This isn’t the first time this has happened. Lee Bruch said members of Greenwood-Phinney Greenways found a block of sidewalk on Greenwood Ave N north of 105th a new years ago, then spent a weekend uncovering it. This makes me wonder, how many more hidden pathways are there around town?

Founder and Editor of Seattle Bike Blog.
View all posts by Tom Fucoloro →
This entry was posted in news and tagged west seattle, west seattle bike connections. Bookmark the permalink.