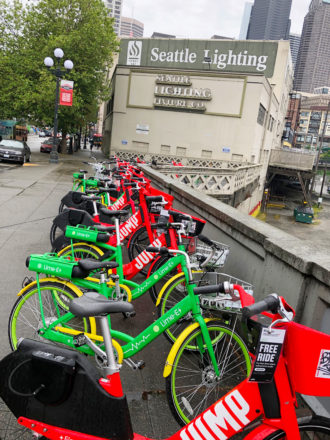 Lime has relaunched e-assist bike share in Seattle, about six weeks after pulling their newly-acquired red JUMP bikes from the streets following a major investment deal with Uber.

There are far fewer bikes hitting the streets than were available before. At its peak, there were nearly 10,000 shared bikes in operation in Seattle, and the city’s permit structure anticipated as many as 20,000 bikes back when multiple companies were competing for users just a couple years ago. Lime is only bringing 500 bikes to start with, but said that number could “grow based upon demand,” according to a press release. The price has also gone up substantially from $0 to unlock plus 25 cents per minute to $1 to unlock plus 36 cents per minute. So a 30-minute ride costs $10.80.

Though Lyft has applied for a permit to launch a competing bike share service in Seattle, there has been no indication that the company intends to follow through. So JUMP is unlikely to have competitors, at least until the city starts to permit scooters as it hopes to do soon. That permit has been tied up in litigation, though the Seattle Hearing Examiner ruled in the city’s favor May 28. It’s not yet known if there will be further appeals.

For now, the bikes are only available through the Uber app. The service area still includes the entire city limits.

Lime killed their own e-bike service at the end of 2019. Then in early May, Uber made a significant investment in Lime at a dramatically-reduced valuation. As part of the deal, Lime took on Uber’s JUMP bike share service, previously known as Social Bicycles. Lime immediately pulled the existing bikes from service and scrapped them. But they promised a fleet of new JUMP bikes were coming.

More details on the launch, from Lime:

Today, JUMP bikes are returning to Seattle to help residents and visitors travel more safely via an open-air, socially-distant option. Seattle is the 2nd city in the world where Lime is relaunching JUMP bikes.

In early May, Lime acquired JUMP, which then pulled its bikes from Seattle streets at the time as a result of the deal to integrate the systems operationally. Lime will now redeploy the bikes, and they will continue to be available through the Uber app. The fleet size will start at around 500 e-bikes and grow based upon demand. Pricing is $1 to unlock and 36 cents per minute thereafter. Starting today, JUMP rentals will only be available in the Uber app. JUMP bikes will be added to the Lime app at a later date as a result of ongoing systems integration.

We know the ongoing COVID crisis has made it difficult for folks to get around. Metro ridership has dropped 72%, with very limited capacity on buses due to social distancing protocols. But we know people still have a need for transportation. With the return of bike share service to Seattle, more residents will be able to make critical errands and get to work in a pollution-free and congestion-reducing manner as King County moves to Phase II of COVID recovery.

A NOTE ON PUBLIC HEALTH PROTECTIONS FOR RIDERS

As part of this relaunch, we’re taking a range of steps to keep our communities safe:

In addition, Lime will provide in-app reminders of our “THRIVE” health and safety best practices, including:

Founder and Editor of Seattle Bike Blog.
View all posts by Tom Fucoloro →
This entry was posted in news and tagged bike share, jump, limebike, uber. Bookmark the permalink.

10 Responses to Bike share is back. Lime relaunches 500 JUMP bikes